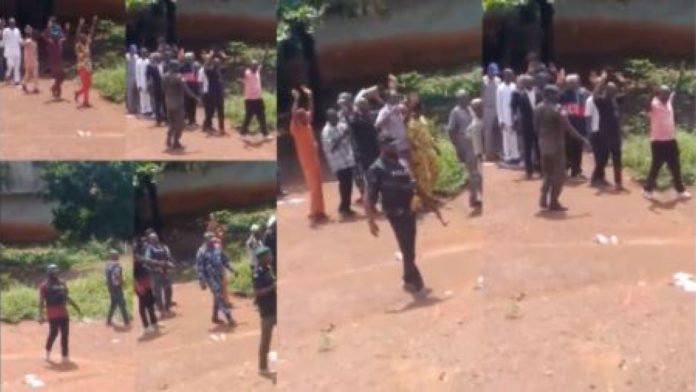 Security operatives on Sunday raided a church on Owerri Road, Enugu State, and marched suspected members of the Indigenous People of Biafra away.

In a video sighted by The Eastern Updates, the security operatives, especially policemen, held guns while members of the church marched out one after the other.

The church members were seen raising their hands and searched as they were being led away by gun-wielding security operatives.

Read Also: Kanu Is Your Son, Discuss With Him – Ohanaeze To Buhari

‘The Nigeria police and military have just stormed a church on Owerri Road, Enugu State, molesting over 50 men, both old and young while matching them to an unknown destination.

‘We are bringing this to the attention of the world. The lives of these men should not be wasted for no crime committed. They were only at a place of worship today being Sunday the 30th of May 2021 and no arms were found with them,’ a source told reporters.

However, the police said 54 persons were brought to Headquarters for questioning for “gathering unlawfully” at Owerri Road, Ogui, Enugu.

Without making reference to the incident in the church, the Police Public Relations Officer, Daniel Ndukwe, in the statement, said, ’54 persons were seen to be unlawfully gathered at Owerri Road, Ogui, Enugu, and brought to Headquarters for questioning.

‘After nothing incriminating was found on them, the Commissioner of Police, CP Mohammed Ndatsu Aliyu, psc, addressed and cautioned them to go home and maintain peace. They all left happily, please.’

IPOB had issued a sit-at-home order in the southeast on May 31 to commemorate the death of many people during the civil war that ended about 51 years ago.