HomeFeaturesShoot Anyone That Attacks You, Umahi Orders Security Agents
Features

Shoot Anyone That Attacks You, Umahi Orders Security Agents 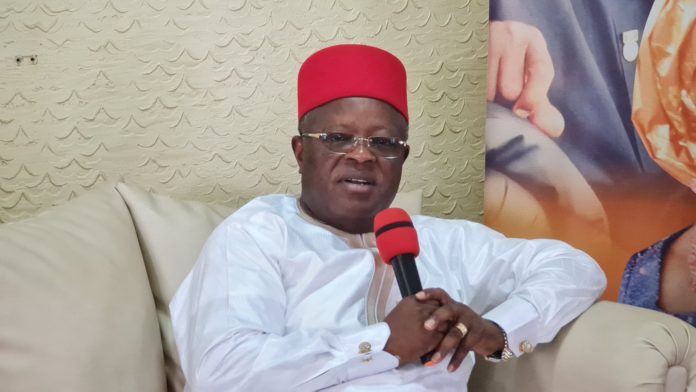 The Governor of Ebonyi State, David Umahi, has ordered security agents in the State to always use their firearms to defends themselves anytime they’re under attack.

Speaking at the weekend, the governor said he feels so ashamed that youths are razing police stations in the south-East region to say that the region is at war.

Umahi gave the charge while receiving the Deputy Inspector General of Police (DIG) in charge of South-East zone, Joseph Egbunike, who paid him an official visit at the old Government House, Abakaliki, Ebonyi State capital.

He equally charged security agents in the state to protect themselves from attacks of armed men who attack them.

‘I charge security agents to engage anyone who attacks them as it is stupid for you to be holding a gun and someone will kill and snatch your gun.’

‘Somebody started playing with the emotions of our people. I feel so ashamed to see that it is only in the southeast region that they are burning down police stations, we are not at war unlike in the north east where we have full-scale war. We feel so sad about it.

‘We had our stakeholders meetings for all the clans and we have tried to educate them. But unfortunately, our youths are being brainwashed.

“The security agents are human beings like others in the society and are also peoples’ fathers and mothers.

“Their lives are not cheaper than our own and you should not allow your personnel posted to the state to leave because we need them and will accommodate them.’

The DIG in his mission statement, thanked the governor for the audience given to him and his team and relayed the appreciation of the Inspector General of Police over his support to the force.

He noted that dialogue and diplomacy were the solution to agitations of marginalization and injustice, noting that such have provided peace in several parts of the world.