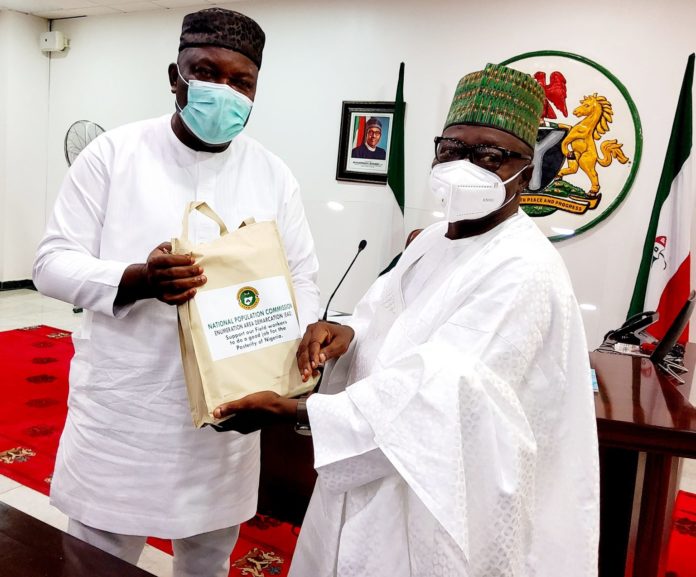 Governor Ifeanyi Ugwuanyi of Enugu State has called for synergy and strategic partnership between the State government and the National Population Commission (NPC), towards ensuring that all population related rights and privileges are accorded to the state in future census exercises.

Gov. Ugwuanyi, who made the call when he received in audience a delegation from the Commission, led by its Chairman, Hon. Nasir Isa Kwarra, at the Government House, Enugu, noted that the published population of Enugu State, in the 2006 Census, which stood at 3, 267,837, was ‘a gross under-representation of our population size’.

The governor therefore said: ‘We do hope that with improved technology and methodology our people will be completely counted in the coming census’.

The leadership of the Commission was in Enugu to support, create awareness and inspire stakeholders’ consensus on the ongoing Phase 14 of the Enumeration Area Demarcation (EAD) in 84 local government areas, spanning 35 states of the Federation, preparatory to the next national Population and Housing Census, in which two local government areas in Enugu State (Awgu and Oji-River) are involved in the exercise.

Speaking further, Gov. Ugwuanyi acknowledged that 14 LGAs have been successfully demarcated in Enugu State, and expressed confidence that the outstanding three council areas, Enugu North, Igbo-Eze South and Igbo-Eze North, will also be demarcated in the remaining phases.

The governor disclosed that his administration, through the local government councils, has consistently provided the needed support for the past phases of the Enumeration Area Demarcation exercise “with respect to sensitization/publicity as well as accommodation and security for the Commission’s field workers”.

Congratulating the NPC chairman and the Federal Commissioners on their recent appointments, Gov. Ugwuanyi assured them of the continued support and co-operation of the state government in the planning and conduct of the next Population and Housing Census in Nigeria.

Earlier in his address, the chairman of NPC, Hon. Kwarra, expressed their profound gratitude to Gov. Ugwuanyi for granting them audience in spite of his “very tight schedule in an effort to bring to the people, good governance and democracy dividends”.

The chairman applauded the governor “for the good work you are doing for the people of Enugu State”, stating that “my colleagues and I are highly impressed with the tremendous transformation in infrastructure that the state has witnessed since you assumed office”.

According to him, “You (Ugwuanyi) have, indeed, lived up to your promise of building a new Enugu State where infrastructure and human capital development have taken a centre-stage.

“While wishing you more successes in the remaining years, we sincerely pray that Almighty God will continue to grant you strength, courage and wisdom as you take the Coal City State to the next level”.

On their visit to the governor, the NPC Boss said that it was “to create public awareness on the Enumeration Area Demarcation (EAD) exercise and other mandate of the Commission and solicit support of the Government and good people of Enugu State for the success of these activities which have direct bearing on the socio-economic and political life of the people”.

He revealed that it is the vision of NPC to become the population centre of excellence and most responsive public institution in Nigeria as well as the leading demographic agency in Africa by 2022, stressing that the Commission aspires to meet the data needs of all end users and ensure a robust population quality for national transformation and global competiveness.