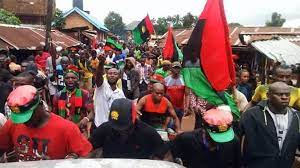 The South-East Igbo Youth Stakeholders have asked the Federal Government of Nigeria to delist the Indigenous People of Biafra (IPOB), as a terrorist organisation and also lift the proscription order on the group with immediate effect.

The Eastern Updates reports that the group made the call in a Communique issued at the end of its convention in Awka, over the weekend.

In a communiqué issued and signed by the Deputy President, National Youth Council of Nigeria, Comrade Innocent Nduanya, Comrade Chuks Okafor, National Association of Nigerian Students Senate President, Maazi Chukwuma Okpalezeukwu, for Ohaneze Ndigbo Youth, Comrade Maxwell Ezelagwu, for Nigeria Youth Congress, Comrade Ilogebe Chidi, immediate past National Association of Nigerian Students President, among others and read by Maazi Okpalezeukwu, the group said that having considered the state of the nation, the increasing state of insecurity and the overall development of the Igbo nation, resolved that as a step towards genuine peace and reconciliation as championed by Ohaneze Ndigbo, Federal Government and South-East Governors, the Federal Government should as a matter of urgency, delist IPOB as a terrorist organisation and release all political prisoners of Igbo extraction.

They regretted the heightened insecurity in the South-East which has resulted in the loss of lives and property and deeply commiserated with the families of the deceased.

The group further called on the South-East governors to synergise and liaise with the relevant stakeholders, especially the youth, to arrest the current security challenges in the region; just as it condemned the wanton destruction of lives and property in the South-East, and appealed to the perpetrators of the criminal acts to desist forthwith and seek a proper means of airing their grievances.

The group also aligned with the resolution of the Southern Governors Forum and called for the necessary legal framework for immediate implementation of the resolutions and proposed for a quarterly interface between the governors of the South-East and the Youth stakeholders so that the issues of the zone soils be regularly reviewed.

The group equally called on the South-East governors to fully implement the recommendations of the END SARS panel reports, especially on youth development, and also review the laws of their various states’ Security Council Committees to include critical youth stakeholders as well as adopt business-friendly policies to attract Ndigbo’s investments back home.

Finally they noted that for fairness, equity and justice, every political party should zone its Presidential candidate to the South-East region.