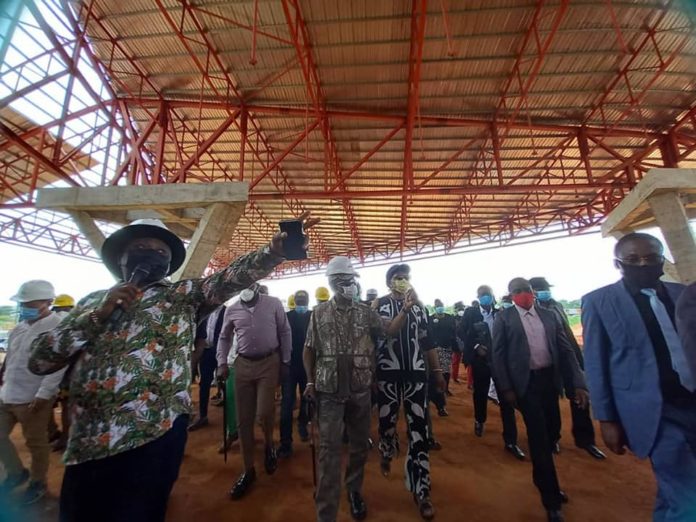 Anambra State Governor, Willie Obiano has told the contractor in charge of constructing the International Conference Center in Awka, to do everything possible to deliver the project by July this year.
Governor Obiano issued the directive when he embarked on inspection of the project in company of his wife, Dr. Ebelechukwu Obiano and other dignitaries.
According to the governor who said that the state did not borrow funds to finance the project, he pointed out his satisfaction at the quality of work, coupled with the architectural and engineering design.
Read Also: Airport, Stadium, Conference Centre Will Be Ready In 2021 – Obiano
He stressed that the only challenge is the pace of work, asking the contractor to pace up.
The Commissioner for Housing, Architect Mike Okonkwo who described it as a multi-purpose edifice, said that the project is already at the finishing stage, as the roof covering is almost completed.
While stating that the COVID-19 challenge put a little hitch on the project at the inception of roofing stage, he explained that the project which sits on a nine hectares land, has minimum of ten thousand sitting capacity, pointing out that one hectare was mapped out for world class hotel, assuring that the project will be delivered before the rains set in.
The Principal Secretary to the Governor, Sir Willie Nwokoye spoke about the multiplier effect of the project on Anambra economy.
The contractor, Mr Mark Tu who explained and apologised for not meeting the deadline, supposed to be yesterday assured that they will continue to deliver standard.