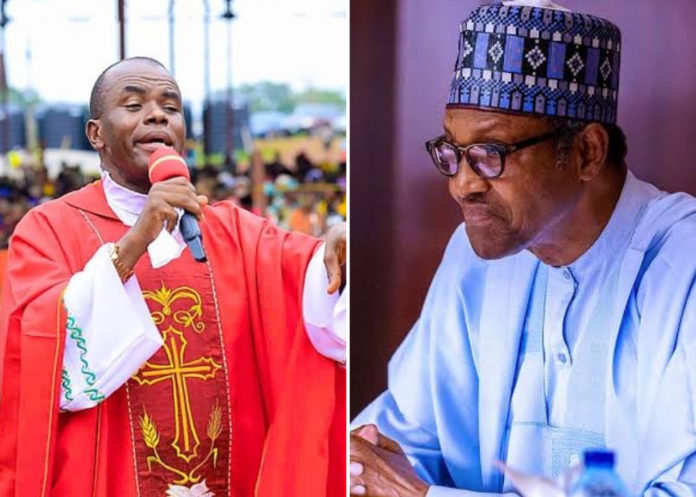 Catholic Priest and Spiritual Director of Adoration Ministry, Enugu, Fr Ejike Mbaka, has eulogized the leader of the Indigenous People of Biafra, Nnamdi Kanu, for championing the cause of his people.

The controversial cleric also spoke highly of Kanu whose group has been proscribed and labelled a terrorist organisation by the Federal Government.

He said; ‘Up till today, I don’t know who Nnamdi Kanu is. I have never seen him face to face. Look at my hand on the altar. But I want to tell you something. Wherever he is, may God bless him. Because if somebody has risen to shout that his brothers are suffering, is it a crime? May the lord bless his courage,’

Mbaka also explained that God had asked him to withdraw his support for the President, Major General Muhammadu Buhari (retd.), and Imo State Governor, Hope Uzodinma, and to prophesy against them.

The fiery priest had caused controversy last year when he prophesied that then Imo State Governor, Emeka Ihedioha, would be removed by the Supreme Court and Uzodinma of the All Progressives Congress would be made governor.

Mbaka had also prophesied that Buhari would become the President and continued to support him at various times. His recent sermon is therefore seen as a departure from his usual stance.

The cleric said the government had failed to protect lives in the country, describing the situation as devastating.

‘Can our security agents and leaders account for us how many children, how many Nigerians have died in one week, under one month? Students being kidnapped from the universities and there is leadership? No. Either they are involved in it or they should stop it or what is happening will stop them.

‘So, Buhari and Hope and those who want to fight, remember there was a time God said I should support you people but now God has asked me to withdraw and prophesy against you,‘ Mbaka said.

He also lambasted Buhari for traveling to London to seek medical help nearly six years after he had the opportunity of fixing the health sector.