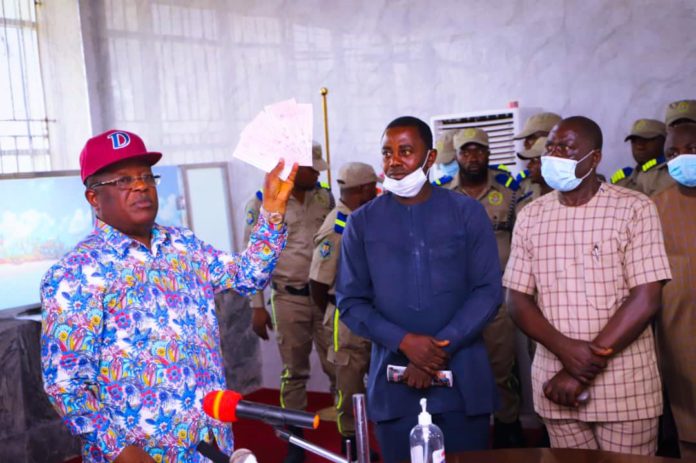 Ebonyi State Governor, David Umahi yesterday, gave security agencies 72 hours to bring the killers of two soldiers, a policeman, and a civilian in the state to book while also imposing a curfew on entry and exit points in the state.

The state government also denied the rumour making the rounds that herdsmen attacked school children in the state.

Umahi handed down the charge at a press briefing immediately after an enlarged security council meeting at the new Government House, Abakaliki.

Read Also: Why People Resort To Self-Help In S’East – Umahi

‘I’m not standing for either IPOB or ESN, but they continue to deny involvement in the violence but for me, criminality is criminality and I have directed security agencies to crack down on all criminal activities in the state. And for those who did the killings, the security agencies must bring them to book within 72 hours, they must do that.’

Two soldiers and other victims were killed by gunmen on Monday night in the state.

The governor directed that all wake keep in the state must end by 6 pm and that anyone who defaults would pay a minimum of N1 million fine.

‘We have directed that all wake keep in the state must end by 6:pm and the local government chairmen, security agents, and Ebubeagu must enforce this. All social activities must end by 6 pm. When you defy this order, you will pay a minimum of N1million because a lot of hoodlum activities that happened this week happened in the night’.

‘We are aware that there are some killings over the weekend; a policeman was killed, two soldiers were killed and I think one civilian and their killers are pure bandits. They do these killings and put it on social media that they are members of IPOB or ESN.

‘We agreed that there is rampant of fake news in Ebonyi State. Like today, somebody posted that herdsmen are in Ebonyi and they are killing people, and schools started closing down; students and pupils started running helter-skelter. Is that what we will continue to tolerate?

As part of measures to stem the tide of the unwarranted killings in the state, the governor imposed a curfew between 8 pm and 6 am on every entry and exit point across the state.