HomeFeaturesIPOB Denies Involvement In The Attack On Zone 13 Anambra
Features

IPOB Denies Involvement In The Attack On Zone 13 Anambra 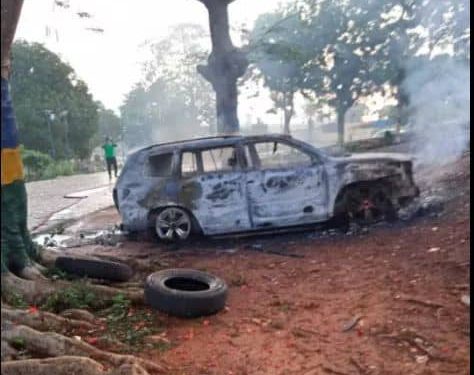 The Indigenous People of Biafra (IPOB) has denied any involvement in the attacks of security agents, agencies, and their formations in any part of Southeastern Nigeria.

IPOB while describing the attack of Police Zone 13 as unfortunate said that it does not involve any violent activity and therefore should not be associated with any violence in Nigeria let alone in southeast and South-South it is working very tirelessly to protect from terrorist and killer herdsmen.

A statement made available to newsmen by IPOB’s Media and Publicity Secretary, Emma Powerful, said ‘We have repeatedly told all media houses in Nigeria that we are not aware of all these attacks on security agencies and their formations across Eastern region.”

‘IPOB and ESN are not involved in any attack on police and security agencies in the country, media houses should stop involving IPOB and ESN. We are not responsible and cannot be responsible for the attack at Police Zonal Command Headquarters at Ukpo Anambra State, because we abhor violence, anybody or security agency involving us is either trying to be mischievous or trying to play to the gallery. Our leader is refined and is leading a refined and enlightened group that is averse to blood-shedding or letting.

‘We are not aware of the attack, please the media should stop asking us anything about unknown gunmen attack because we do not know them and we have repeatedly say this that we cannot go to the level of attacking security agents, agencies and their facilities because it does not in any way help our course.
‘Nobody should ask us about any attack on police or other security formations because we are not a violent group, we abhor violence in any form or shape.

‘Nigeria government and her partners in crime are always accusing IPOB and ESN of their problem but we want to tell the whole world that we are not responsible for this barbaric attack, and the Federal government of Nigeria and their confused security agencies know the truth and just decided to be economical with the truth, they know were their problems lies. Their misrule and years of injustice is hunting them and they will not be free until they tell the world the truth.’