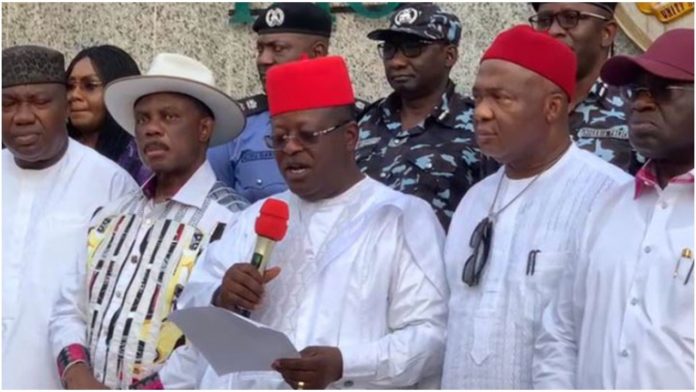 The Coalition of South-East Youth Leaders (COSEYL) has hailed the South-East governors over the establishment of regional security force Ebube Agu.

In a statement by COSEYL President General Goodluck Ibem on Tuesday, the Igbo group welcomed the development stating that the move was long overdue

‘The new security outfit code-named ‘Ebube Agu‘, formed by the South-East governors is a welcome development. We commend them for the first bold step taken by our governors,’ the statement read.

Read Also: Anyone Who Joins Ebube Agu Will Join His Ancestors – IPOB Warns

‘But we must ensure that the outfit is not politicised, a situation where persons who are not capable are given preference and appointed to head positions they can not deliver.

‘The new outfit must live up to the expectation of the people. The personnel of the outfit should be trained in line with the 21st century challenges facing the region.

‘The South-East has been faced with so many challenges as we have experienced in the last few days and require urgent attention to nail the problem stirring us in the face. The security threats place new burdens on the shoulders of the new security outfit.

‘Adequate training is paramount to instill confidence in the personnel that will be engaged, which will help them to deliver on the task ahead,’ Goodluck concluded in the statement.