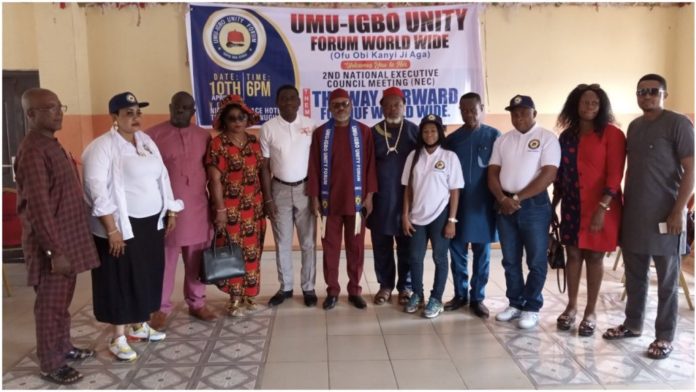 Members of a South-East socio-political group, Umu-Igbo Unity Forum Worldwide, rose from their meeting, weekend, blaming the worsening insecurity in the zone on joblessness.

The meeting, held at Enugu, was attended by National officers of the Forum, led by the President-General, Dr. Godwin Chinedu Duru, as well as delegates from across the country.

In a communique signed by the Secretary-General, Mazi Buchi Ogbonna, the group lamented the worsening poor security situation in the South East States occasioned by frequent and wanton destruction of lives and properties by unknown gunmen and other criminal elements.

They called on the Federal Government, South East Governors and Security Agencies ‘to nip the ugly trend in the bud and stop the killings and destruction of properties as no region or nation can move forward without security of lives and properties.’

The communique stated that, ‘the Forum vehemently condemns the recent killings and destruction of properties that took place in Enugu and Ebonyi State respectively, the jail break and burning of the State Police Command Headquarters in Owerri, Imo State Capital, the frequent killing of Police Officers on duty, the attack and burning of several Police Stations by hoodlums and criminals which has become the trend in all South-East States and called on the South East Governors, Chief Security Officers of their various States to work in collaboration with all Security Agencies to stem the tide and stop further loss of properties and destruction of properties in the region.’

‘The Forum opines that the major cause of insecurity is unemployment and joblessness at the grassroot which leads to youth restiveness and makes the youths readily and easily available for criminal activities.’

‘The Forum, therefore, calls on the Federal and State Government to revive and the Local Government System which the third tier of Government and make it more financially viable and vibrant in order to create employment and jobs for the teeming Youths at the grassroot to keep them busy and away from crimes and criminal activities.’

‘The Forum also calls on the Federal Government to regig and restructure the security apparatus of the nation to make more effective and proactive in the discharge of their duties of crime prevention and protection of lives and properties of the citizens by establishing State and Community Police to compliment the efforts of the Federal Police in the fight against crime and criminal activities prevalent in our country.’

‘It calls on the Federal Government to decentralize the Police Force by creating State Police under the command of State Governors and give State Governors commanding powers as the Chief Security Officers of their States to swiftly deploy the Force to troubled areas in times of emergency and save lives and properties in their States.’

‘The Forum also frowns at the bad and deplorable condition of most Federal roads in the South East and the infrastructural deficit in the Region and called on the Federal Government to act fast and repair the bad Federal roads before the onset of the rainy season to ease movement of goods and people into the region and also improve other infrastructure in the region to make life more meaningful and enhance the economic activities of the people of South East.’