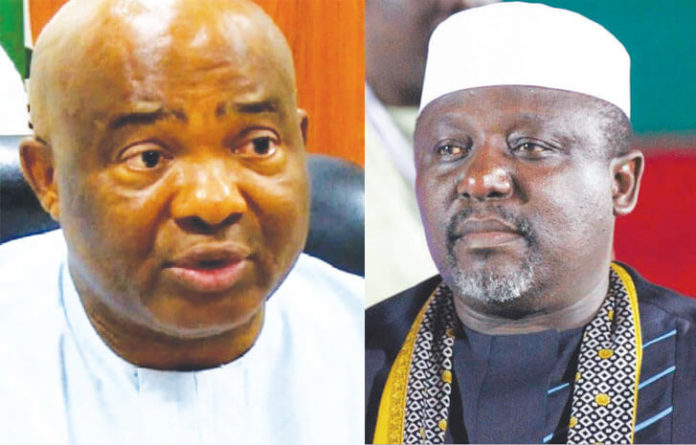 Former governor of Imo State, and senator representing Orlu in the national assembly Sen. Rochas Okorocha, has called on Governor Hope Uzodimma to deploy dialogue and consultation as surer ways to resolve the security challenges rather than confrontation approach.

He noted that despite the challenges of Independent People of Biafra (IPOB) and other agitators during his tenure as governor, he was able to keep the state peaceful due to his wide consultation among relevant stakeholders.

Okorocha offered this advice in a brief speech in Kuru, Jos South Local Government Area of Plateau State, after a condolence visit to the family of late Mrs. Felicia Biskanga.

Read Also: Okorocha Gets 48 hours Ultimatum To Apologize To Uzodinma

He emphasized that except justice is allowed and poverty stamped out, the workload on the military and the police Force would yield little or no results.

On the worsening security situation in Imo State and all over the country, he noted that Nigerians were passing through a very difficult moment in the history of the nation.

In a related development, the Imo State Chapter of the Peoples Democratic Party has said that the attacks on the police headquarters and the Correctional Centre are clear indications that nobody is safe in the state.

The party noted that if stranger elements could gain easy access into the inner recesses of the central points of security administration in the state that means nobody is safe under the watch of the current administration.