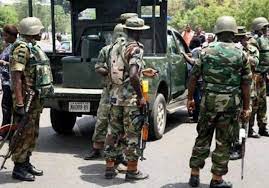 Following the recent spate of insecurity witnessed in Imo State, the Nigerian Army on Thursday began a show of force in the State even as residents are now scared for their lives.

According to eye witness reports, news correspondents were able to gather that the military exercise was a result of Monday’s attacks on Owerri Correctional Center and the Imo State Police Command headquarters.

The attackers, who operated between 1 am and 3 am also attacked a military base at Ukwuorji on the Owerri-Onitsha expressway, burnt a soldier in a car, and razed four military operational vehicles later the same day.

The military exercise was intended to burst the morale of security agents and to restore the confidence of the people in the security agents, a source told newsmen.

Read Also: No Govt Can Defeat Her Citizens, Time To Pay Back – Kanu

According to the source, ‘The operation show of force is a military exercise targeted at restoring the confidence of the people in the security agencies. It is also a way of raising the morale of the operatives after Monday’s deadly attacks. It is a reassurance that the security agents have the capacity and capability to enforce public order and decorum.’

Meanwhile, the leadership of the Imo State Police Command had on Thursday begun the deployment of no fewer than one thousand cops to strategic places and security facilities in the state.