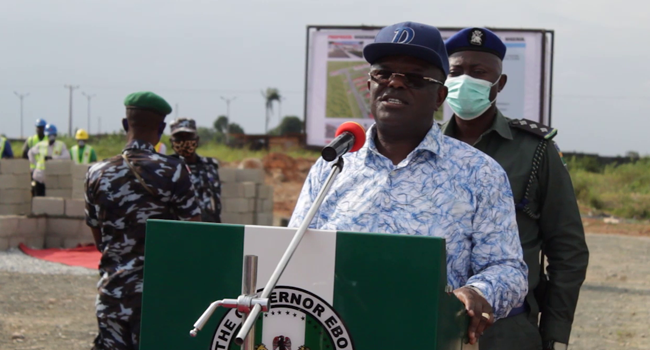 Ebonyi State Governor, Dave Umahi, on Wednesday imposed a dusk to dawn curfew in Effium in Ohaukwu Local Government Area as part of efforts to restore peace and calm to the troubled community.

Umahi, gave the directive through his deputy, Kelechi Igwe, saying that the curfew is to commence with immediate effect.

Announcing the governor’s directive at Effium while on assessment visit, Igwe, stated military and police personnel have been fully deployed to man all exit and entry points, including forests and bush parts to enforce the order.

The deputy governor, in a statement by Monday Uzor, chief press secretary, also warned miscreants and hoodlums believed to be members of the Eastern Security Network hiding in the forests and bushes to vacate the community immediately in their own interest as security agents have been directed to route them out.

‘Also, those who are in the habit of raising the false alarm to distract and divert the attention of security agents are by this announcement advised to desist from doing that as such person(s) will be tracked, arrested and prosecuted as one of those promoting the crisis,’ the statement read in part.

Residents of Egedege, Obegu, Umuhuali, and Amauzu communities and its environs in Ishielu Local Governement Area are still living in fears about 48 hours after suspected Fulani herdsmen killed several persons

This is as the report has it that a mobile handset belonging to one of the assailants has been recovered.

It was gathered that the mobile handset recovered at the scene of the incident may have provided some clues to unraveling the perpetrators of the attack.

Governor Umahi, while condemning the act on Tuesday, said the government was in possession of credible lead to the assailants.