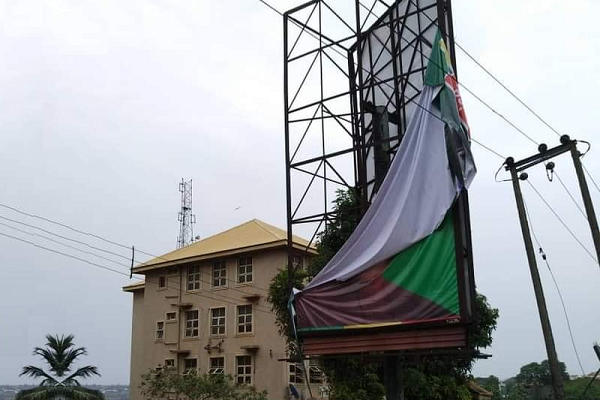 Ubah, in a statement by his media aide, Kamen Chuks Ogbonna, declared that the state government was paid before his billboards bearing various messages were mounted.

This came few months after the duo engaged in a political battle that erupted when Ubah reportedly commenced rehabilitation of some federal roads in his constituency.

That faceoff was preceded by a war of words that broke out between the duo when the senator organized fundraising to battle COVID-19 in the state; a move the government distanced itself from suggesting that it was suspicious.

‘Governor Willie Obiano has ordered thugs accompanied by the officials of Anambra Signage and Advertisement Agency (ANSAA) to destroy billboards erected by Senator Patrick Ifeanyi Ubah in several parts of the state. Already, 12 billboards fully paid for and erected in several locations across the state have been pulled down on the orders of an obviously jittery state government that has failed in its duty and social contract to Ndi Anambra.

‘Before embarking on the mounting of those billboards, we approached the Managing Director of Anambra State Signage and Advertisement Agency (ANSAA), Chief Jude Emecheta, who personally gave us the breakdown of the bills to be paid and all these monies were fully paid and receipts issued.’

Ubah attached two ANSAA receipts bearing the sum of N6 million and N1.5 million respectively to show he paid for them. The receipts were dated March 9 and 11, respectively.

When contacted, the ANSAA boss, Emecheta, said Ubah’s claims were false. He said the senator paid for 10 exposures but ended up mounting 19. He said his agency pulled down only two billboards while owners of the others who had issues with the lawmaker pulled down the rest.

‘Ifeanyi Ubah paid for 10 exposures and I told them, before you place any of the billboards, give me the sites you’re paying for so that we will know when they are encumbered on us. But they went ahead putting billboards everywhere in the state. As I talk to you now, he has exceeded the 10 sites he paid for,‘ he explained.