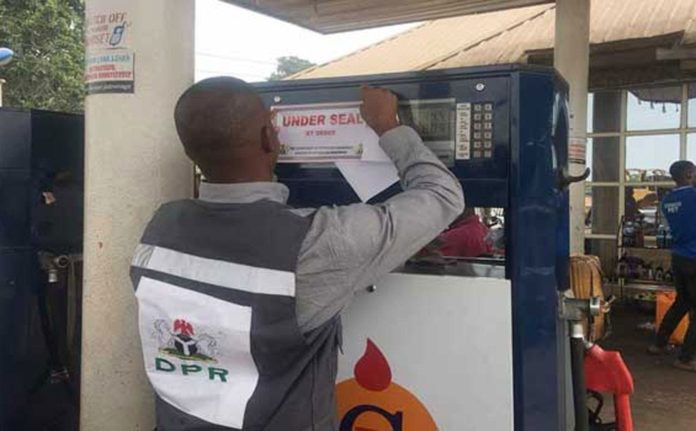 The Enugu Field Office, of The Department of Petroleum Resources (DPR), on Monday, disclosed that it has sealed eight petrol stations in Enugu for dispensing Premium Motor Spirit, (PMS) above the approved government pump price.

This move was announced, the Head of Operations, Mr. Afam Azuike who stated that the action was in reaction to public outcry over the weekend that petroleum marketers had arbitrarily increased the pump price PMS.

Accorrding to him, this information spurred the field office of the agency to embark on aggressive surveillance in the Enugu metropolis during which they inspected 29 petrol stations.

‘We discovered that the major marketers sold between N162 and N175. They complained about the cost of the product at the depot as well as the freight charges from Lagos to Enugu.

‘We are aware that the government has not increased the price band of PMS which is on partial deregulation.

‘The current price band is cost-reflective, taking into cognizance the international cost of crude oil and cost of importation of refined products,’ Azuike explained.

According to him the eight petrol stations were sealed in the course of the operation but explained that three out of the sealed stations eventually reverted to the government-approved price and were reopened.

He said that the five that refused to revert would remain sealed and be sanctioned in line with the default regulations. He noted that they discovered that several petrol stations were under lock and key, saying

‘we do not know whether they have products or not but the surveillance will continue.

‘We noticed that there was panic buying of PMS in Enugu over the weekend but after this surveillance, there will be a free flow of products in the state.

‘We want residents of the state to know that there is no fuel scarcity in the state’. Azuike however appealed to commuters not to play into the hands of greedy petroleum marketers, urging them to report anyone selling above the approved pump price.

‘No one should be compelled to buy PMS above the approved pump price. Our office is always open and if you report defaulters we will swing into action’, he warned.