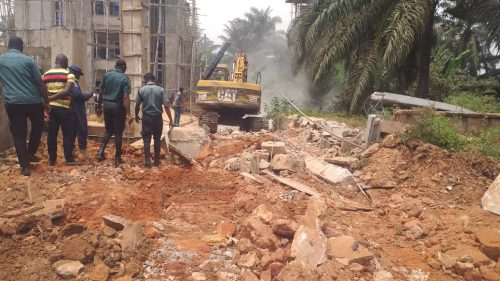 Developers in Anambra State have been against blocking flood channels when constructing or erecting any structure, especially as the rains approach.

The Executive Chairman of the Anambra State Physical Planning Board, Barrister Chike Maduekwe who dished the warning during an enforcement exercise at Abubor-Nnewichi Nnewi, asked potential developers to obtain government approval before embarking on any project in the state.

Reports had it that a developer blocked and erected structures on a drainage channel, causing flooding in the area during the rainy season.

The perennial flooding and other environmental challenges such as climate change, global warming, pollution, blocked drainage channels, canals, and the rest, have been a major headache to the Anambra state government.

Therefore, Anambra State Physical Planning Board, the state government agency with the legal mandate to control developments across the state is leading series of actions put in place by the Anambra state government to explore effective urban planning, developmental control, drainage designs, dredging, construction of drainage channels and environmental education to mitigate all climate change-induced problems confronting the state.

Consequently, the Board became concerned that despite these efforts, a developer would still go on to block a flood channel, sand-filling the drainage channel, erecting a fence and building through the path.

Several warnings by the government to the developer to stop further development as far back as 2019 had fallen on deaf ears.

The officials of the board, therefore, paid a visit to the location, cleared the road path and opened up the drainage channel.