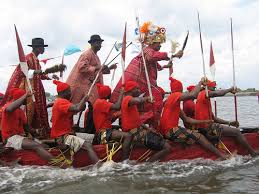 A mob of angry youths in Umunede town in Ika North-East Local Government Area of Delta State have attacked officials of the state fire fighting agency for allegedly arriving late at the scene of the fire outbreak.

The officials were pelted with stones and chased away at the scene of a gas explosion that occurred in the agrarian community.

The explosion is coming barely one month after scores died when a gas plant exploded in Agbor, in neighboring Ika South council.

In the Umunede incident, a retail gas shop went up in flames after a gas cylinder exploded as a result of a suspected leakage from of the cylinders.

No human casualty was however recorded, although properties were consumed by the resulting inferno.

One of the irate youths who refused to disclose his identified, alleged that it took a long time for men of the State Fire Service to get to the scene after the fire had escalated.

He said the late arrival of the firefighters angered the community youths who chased the officials away.