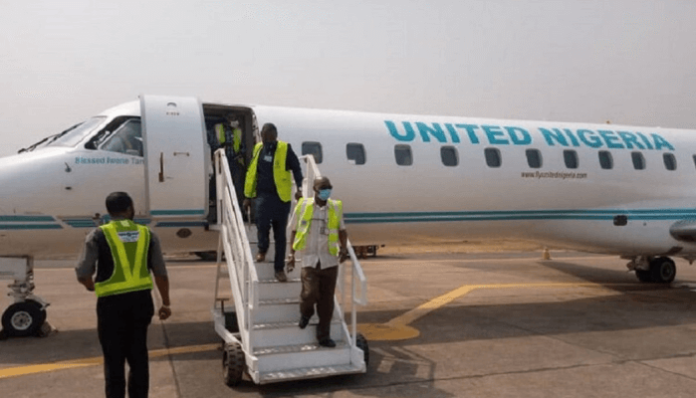 The inaugural flight, of the United Nigeria Airlines, landed successfully in Enugu on Friday, It was a 50-seater Embraer 145 aircraft, which left the Murtala Muhammed terminal two (MMA2) at about 10 a.m, arrived at Enugu airport to a ceremonial water canon by officials of the Airport fire service.

It is important to note that the commencement of flights by United Nigeria has increased the number of airlines operating in Enugu to four.

Onboard the flight, with over 90 per cent load factor, was the Chairman of the Airline, Obiora Okonkwo while the flight on arrival was received by Enugu State Government officials, the Federal Airports Authority of Nigeria (FAAN), and other dignitaries.

The Chairman of the airline said he was driven by the desire to serve the country and mankind while uniting the people of Nigeria with the airline.

‘We saw that there is a gap in this industry and we have not made any mistake to make Enugu aviation hub.

‘Enugu state government I believe will give us encouragement.

Okonkwo said the airline would consolidate on the domestic operations and also explore regional flights in no distant future.

‘Our short term plan is to consolidate. You can see we have a base in Enugu.

‘And we have to consolidate, establish all our routes, and then work about expanding.

‘We want to expand beyond Nigeria, starting from the West Coast; just for a start. We have a big plan.’