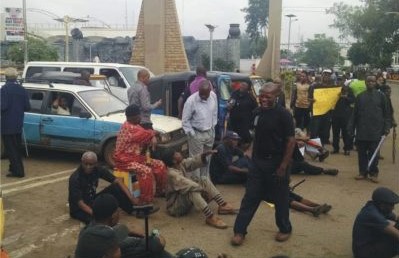 As the shared prosperity administration of Senator Hope Uzodinma continued its verification in Imo State, the retirees are said to be facing hard times since last year even as one reportedly slumped yesterday.

The Eastern Updates gathered that the pensioner who is said to be in bad condition slumped at the state secretariat Owerri located along Portharcourt road on Wednesday while he was filling his own form.

The man whose name is withheld for security reasons was said to have slumped as a result of suffocation and heart attack and was later taken to hospital by those were around him as at the time he slumped.

The pensioner, who slumped according to information, hails from Mbaise and is said to be above 70 years of age.

His colleagues who spoke to our reporter regretted why the government should be treating old men and women like animals adding that they have been facing a lot of difficulties since Senator Hope Uzodinma came into power as Governor of Imo State.

The retired workers disclosed that they have been coming since last week for their unpaid pension money. They further complained that what government is doing now is applying delaying tactics.

The pensioners have not been paid since March last year even as the state government has claimed that it has fully paid the genuine workers and pensioners in Imo State. It could be recalled that a female pensioner from Ngor Okpala LGA slumped last year at the state secretariat.