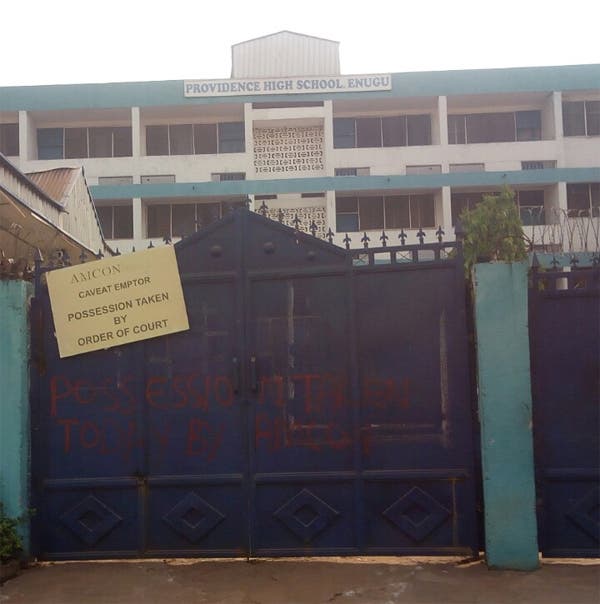 No fewer than 344 students of Providence High School Enugu are still under confinement by the Asset Management Company of Nigeria, AMCON, as at Monday, January 25, 2021, five days after they locked up the entrances to the school with students and staff inside the premises.

The management of the School has raised alarm over the lives of about 344 female students of their school which are presently under serious threat following the actions of AMCON. They also described as unfortunate the attempt by AMCON on Monday to discredit the reports of national dailies, on detaining the students, saying the reports that it locked up the premises of the school with students inside were ‘spewed mischief and half-truths regarding the real issues about the enforcement exercise at the school’.

Its Head of Corporate Communication, Jude Nwauzor, stated that the gates of the school were ‘still open and activities ongoing’, adding that the Company could not have ‘locked up a school offering social services’.

He stated that what the officials did was to place the normal notice of possession of the property and left. But as at 5.30 pm when newsmen visited the school premises, the entire entrances were still under lock and key, even as the management of the school decried the ‘continuous incarceration of the students and their teachers by AMCON‘.

Recall that AMCON officials led by one Nick Omeye had on Thursday, January 21 at about 5.30 pm in company with over 40 armed police officers locked up entrances to the boarding school following a court order it obtained in 2016, empowering it to take possession of the school facilities.

The Proprietor of the School, Chief Mrs. Elizabeth Onwuagha addressing newsmen on AMCON’s denial of evasion on her school, said that the gates of her school were still under lock and keys of AMCON.

Mrs. Onwuagha told reporters that AMCON was being deceitful and wondered what benefit would be lying to the public over the forceful seizure of the school’s facilities with its students inside would be to them. ‘I cannot understand why anybody would say that this place is not under lock and key. It is most unfortunate that people will say that white is black. It is sad.

‘There is no way we can combat any emergence. Human beings are here. From 21st Jan when these gates were locked till today, Jan 25, the gates are still locked up with students inside the school premises.

‘See all these phones belonging to my staff, they destroyed them, they were smashed. I asked you to come because of the publication we read today in most of the newspapers where AMCON is denying that they did not lock our gates, you can see the gate yourselves gentlemen that the gate is still under lock and key of AMCON’, she said.

Narrating his ordeal in the hands of the AMCON officials and security personnel, one of the staff, Ezekiel confirmed that he was beaten and manhandled because he appealed to them to know that students were in the school and that their violent approach may cause much harm.