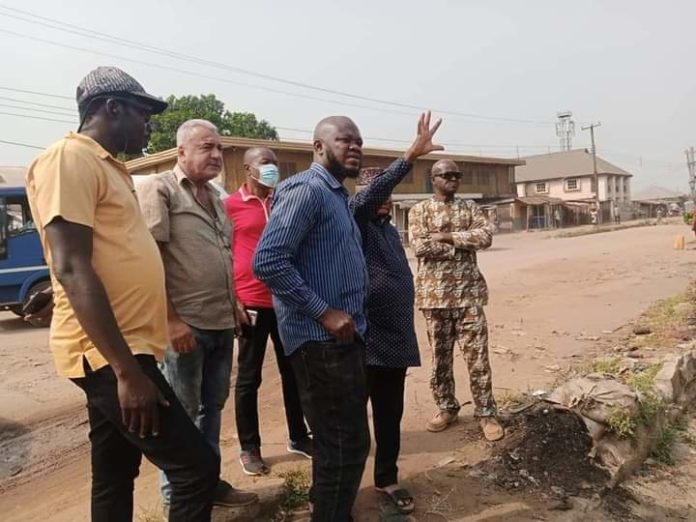 The Abia State Commissioner for Works, Barrister Bob Chiedozie Ogu, has reiterated the commitment of the State Government to reconstruct the dilapidated Aba Ikot-Ikpene road from Opopo Junction in Ogbor Hill Aba.

The Commissioner disclosed this when he visited the Ikot-Ikpene road which is under reconstruction.

He stated that after a review of the bad state of the dilapidated road, the Governor, Dr Okezie Ikpeazu directed that the road be done with rigid pavement technology to ensure durability.

Barrister Ogu pointed out the economic importance of that road which links Akwa-Ibom and Abia.

He assured that the rigid pavement and drainage system on both sides of the road which will move the storm water to Aba River will solve the problem of flooding on that road.

The Commissioner said the Governor was worried over the plights of the people and his administration can’t continue waiting for the CCGC company and the Federal Government because of the strategic nature of the road.

“Recovery of this road will revive the businesses in this area which has gone comatose and will boost economy of the state,” Ogu said.

Recall that in February last year, the Minister of Works and Housing, Mr Raji Babatunde Fashola visited Ikot-Ekpene road and directed the Chinese company CCGC to carry out a palliative work from Opopo Junction while they continue with the project but the said directive by the Minister was not carried out as the Chinese company are busy with the Akwa-Ibom segment of the road, subjecting those in Abia to untold hardship.

The Commissioner, accompanied by the Permanent Secretary of the Ministry, Engr Sunday Okpara and the Director Maintenance Engr Ememe, took the contractor to all the bad spots on the side of Abia.