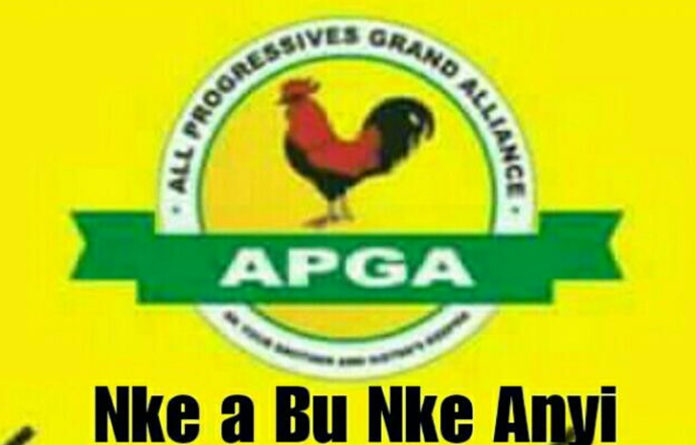 With less than 10 months to this year’s governorship election in Anambra State, the All Progressives Grand Alliance, APGA is mapping out strategies to retain the seat currently occupied by Governor Willie Obiano.

As part of the strategies it is mapping out, the party has directed all its members whose membership and voters’ cards were lost to rush to their various ward levels and Independent National Electoral Commission, INEC this January and obtain a replacement of their lost cards.

Chairman of Idemili North Local government Transition Committee, Chief Raphael Asha Nnabuife who gave this directive yesterday in his residence at Nkpor, while distributing cash and gifts as palliatives to the state, local government, and ward members of the party, leaders, and stakeholders said the party faithful should not take this year’s governorship election in the state for granted, to avoid losing the seat to other parties in the state. Nnabuife commended the party loyalists for the confidence reposed on their leaders over the years and urged them not to relent in retaining APGA in the seat to avoid disorganizing all the economic and security strategies already put in place by APGA in the state.

Job In his speech, an APGA stakeholder in the state and former Deputy State Chairman of the party, Chief Ifeanyi Udokwu commended the council boss, Nnabuife for magnanimously dipping his hands into his private pocket to procure the large quantities of rice, tomatoes, onions, vegetable oil, face masks and above all, a token amount of cash to distributed round all the members from the local government 21 wards in the area.

Non-APGA Party members present at the event also benefitted from the gift items. Udokwu who is also the traditional Prime Minister of Ogidi community, also \used the occasion to introduce Chief Chuks Igboanua aka Ezeoba as the new Chairman of APGA in the Idemili North council area and urged the members to obey him.

Also speaking, another party stalwart in the state and a Special Adviser to Governor Willie on Political Affairs, Chief Ifeatu  Obi-Okoye, who announced a personal donation of N100,000 to augment Nnabuife’s gifts, said Nnabuife has succeeded in doing both party members and the entire electorate in Idemili North proud since his assumption of office as chairman of the local government transition committee, a few years ago.