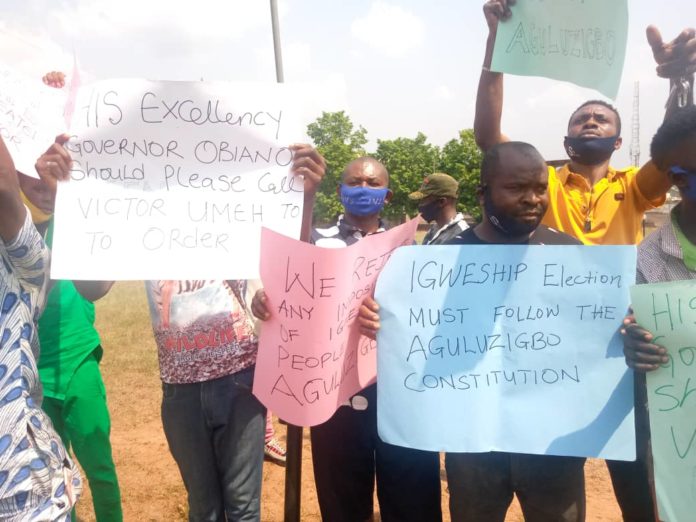 The leadership crisis currently rocking Aguluzigbo community in Anaocha Local Government Area of Anambra State may have worsened following the inability of the community leaders to agree on modalities for the conduct of election into the community’s traditional stool.

Some residents and stakeholders of the community had kicked against the poll which was held last Friday, January 15. Even as the youths of the community stormed the Government House, Awka on 12th January to protest the perceived anomaly.

Regardless, the election was held in the community’s hall amid tight security. Chief Chuka Barth Asouzu gathered 113 votes while Chief Rufus Ugochinyelu Ilodiba polled 840 votes and was declared the winner.

Supporters of Azouzu alleged that they could not vote because their names were expunged from the electoral register despite satisfying the constitutional requirements.

Asked for clarifications on the issues raised by Asouzu’s supporters, the president-general of the community, Mr. Madueke, noted that the electoral committee was only following the constitution of the town.

He further explained that voters’ register were complied with by the village chairmen and that they were in a better position to offer explanations on the alleged development.

Reacting to the development, Joseph Dimobi, the former leader in the Anambra State House of Assembly, stated that the electoral process was characterized by violence and was flawed from its beginning.

‘Why should we have the invasion of the town by more than 200 policemen? Is it the way Igweship election is done in other towns? Is our town different from others? Why are they unleashing terror on us using the instrumentality of government?‘ he queried.

The former lawmaker pleaded with the state government to cancel the election and reschedule it to 31st December 2021 to enable the town’s general assembly to participate in the election of their Igwe as the constitution stated.

Former senator for Anambra Central, Senator Victor Umeh, in his reaction, said that the election was peaceful and that he was satisfied with the way it was conducted.

‘The election was peaceful, there was no interference. The world will now know that Aguluzigbo is truly a united, peaceful community‘, Umeh stated.

But one of the contestants, Asouzu, while describing the election as a ‘complete charade!‘ said; ‘We saw the manipulation coming. Even the chairman of the election committee resigned and the secretary resigned yesterday. So you can imagine the type of election so conducted!‘