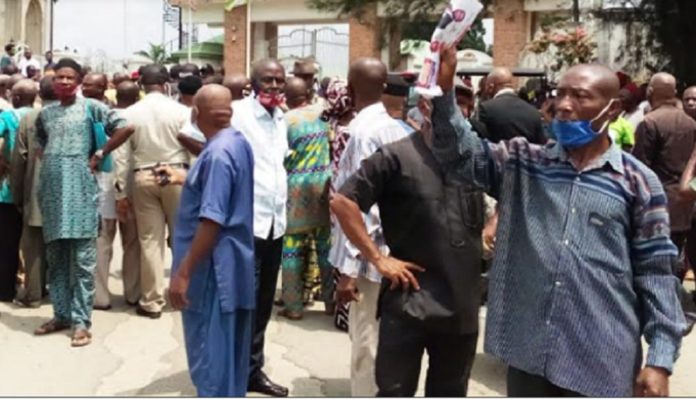 Thousands of Imo State workers and pensioners since last week have thronged the office of the Commissioner for Information, State Secretariat, Owerri, filling forms hoping it will help solve the problems of the non payment of their salaries and stipends.

At the apartment of the Ministry of Information, State Secretariat, Owerri, civil servants and pensioners were seen in great numbers, in defiance of the covid-19 protocols, struggling to pick and fill a certain form being distributed to them to enter their details.

A very pathetic story is that of a fragile looking man who simply introduced himself as Mr Okoro. Mr Okoro who said he retired as a gardener in one of the Ministries told Newsmen that throughout 2020 he received his stipend only twice (January and February) adding that since then till date he has not been paid again.

On his take home monthly, Mr Okoro reluctantly told this Reporter that ‘it is not up to five thousand naira’. He said he has been living on people’s goodwill otherwise he intoned ‘I would have died since’.

It would be recalled that last Tuesday on Ozisa FM radio program in Owerri, the state Commissioner for Information, Chief Declan Emelumba repeatedly said that the Hope Uzodinma government is not owing any worker or pensioner.

But observers at the Secretariat doubt the veracity of the claim by Commissioner Emelumba. They wondered how over close to ten thousand unpaid Civil servants and pensioners could be tagged ‘ghosts’ when they are physically present at his Ministry.