HomeFeaturesPresidency Should Go To S'East To Heal Wounds Of Civil War –...
Features 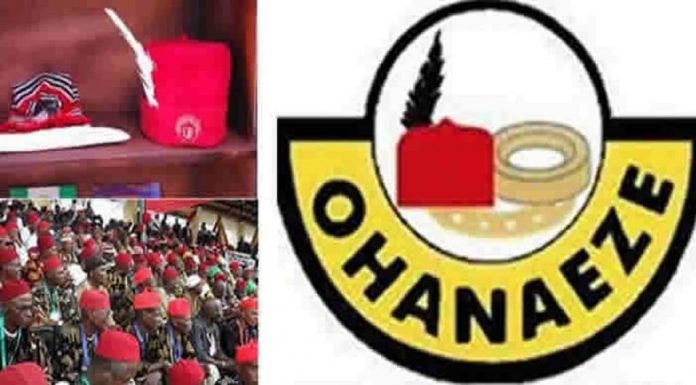 The outgoing Deputy Spokesman of apex Igbo socio-cultural organization, Ohanaeze Ndigbo, Chuks Ibegbu, has thanked Ndigbo for giving them the opportunity to serve them in the last four years.

In what looks like a valedictory statement in Umuahia, on Saturday, Ibegbu said the outgoing leadership did its best to improve the image of the apex Igbo body.

He noted that Igbo marginalisation started after the civil war and must not be underrated by the federal government.

He blamed some Igbos who exhibit what he termed PULL-HIM DOWN SYNDROME and NSHIKO MENTALITY to turn a new leaf.

Ibegbu called on Igbo political leaders to emulate the Great Dr. Michael Okpara , the premier of the former Eastern region who made the region the fastest growing economy in the world in the 60s and Dr Sam Mbakwe who achieved a lot in the old Imo.

He lauded the founding fathers of Ohanaeze Ndigbo, prominent of them being the first indigenous Governor of old Eastern region, Dr Akanu Ibiam.

He regretted that present Igbo leaders have not done enough to replay the achievements and candor of these great Igbo leaders of years ago.

The chieftain insisted on the restructuring of Nigeria as the only way out of her woes and noted that the 2023 Presidency should go to the South East as a balm to heal the wounds of the civil war.

He noted that Nigeria is a giant on mosquito legs due to the selfishness of her rulers and warned that unless the rulers change their ways, the nation will become a failed one soonest.

He urged all Nigerians to work together and build a great nation.

According to him, God richly blessed the nation but her rulers have made it appear as if it’s a cursed nation due to corruption and looting of her resources.

Ibegbu called on all the delegates to shun undue influence and money and salvage their race by electing patriots including himself to run the affairs of Ohanaeze Ndigbo.

He further called for a similar support to his successor but promised to offer advices when needed.