HomeFeatures‘No Herdsman Was Chased Out Of Ebonyi’ - Miyetti Allah
Features

‘No Herdsman Was Chased Out Of Ebonyi’ – Miyetti Allah 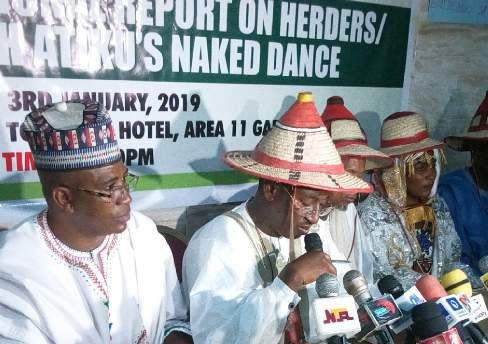 Ebonyi State and Miyeti Allah Cattle Breeders’ Association (MACBAN) have said no herdsman was attacked or chased out of the state.

A video and audio recording on social media alleged that some herdsmen were attacked and chased out of the state.

But the government yesterday said the video was false. It described it as the handwork of the enemies of state, and called on security agencies to arrest the perpetrators.

Attorney-General and Commissioner of Justice Cletus Ofoke, who chairs the Committee on Herdsmen/Farmers Relationship, said neither the security agencies nor the committee received any report of such development.

He said: “The video suggests that some herders and their families were attacked and chased out of Ebonyi. We didn’t witness or receive any report; neither did we get information from the association or security agencies.

‘The video and audio in circulation are not the true position of things. Each time there are issues, we interact with them. We have channels of communication from the local government level to state level.’

‘Nothing like that exists between the herders and farmers.’

Secretary to the State Government (SSG) Kenneth Ugbala described the message behind the viral video as misleading and an act of falsehood.

He said: ‘The video is false. Through the governor, we have enjoyed peace with our herder-brothers. We can no longer remember the issue of clashes between herdsmen and farmers. The video is perpetrated by the enemies of state.’

A statement by MACBAN Secretary Alhaji Sani described the video as false, fake, and misleading, and an orchestrated attempt by mischief makers and enemies of peace. According to him, members of the association are at peace with their hosts.

The statement reads: ‘Herdsmen in Ebonyi State have co-habited peacefully with their host communities without any fear of molestation, threat or intimidation to them or their cows’.

According to Sani, the herdsman in the video left Ebonyi on his own volition to his hometown in Taraba State.

Commissioner of Police Philip Maku also debunked the authenticity of such video.

‘Herdsmen are not under attack or being chased out of Ebonyi State. Alhaji Adamu peacefully and willingly relocated to Taraba State,’ he added.