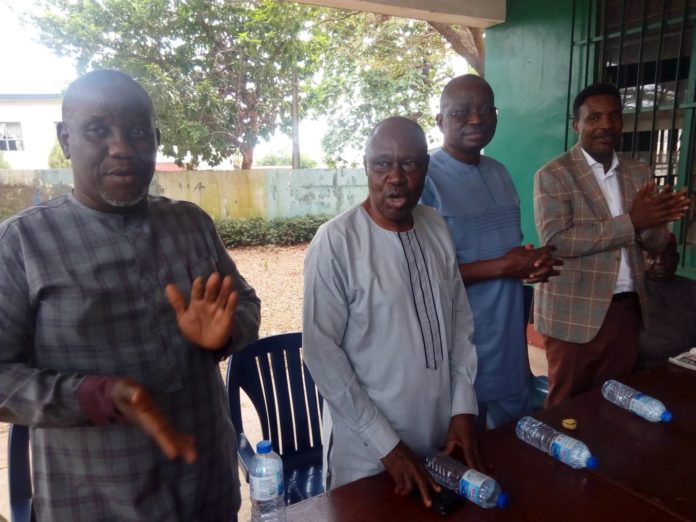 The All Progressives Congress, APC, guber candidate during the 2019 election in Enugu State, Senator Ayogu Eze, on Saturday, hinted that two more governors from the Southeast are on their way to the party.

Ayogu spoke at the Enugu State APC Secretariat where he came to present gift items to the party members for the New Year.

He was also optimistic that the APC would form the next government in Enugu State.

‘A new dawn is about to begin for APC,” he declared, stating that ‘ if we play our card well, we will be in a position to form a new government in Enugu State.

‘We need to lay a good foundation, and if we do, in 2023, APC will form the next government. We are now realigning, we are talking to our brothers and friends in other parties.’

‘We want to strengthen the structure of our party at the grassroots so that in 2023, APC will form the next government in Enugu State.’

‘I also want you to know that on behalf of the leaders, we are not relenting, we are talking to our friends across parties, across other divides, because you can see that APC is becoming like a beautiful bride in the Southeast, Ebonyi has fallen, Imo has fallen, and I can predict to you that one or two more States will fall very soon.’

‘I must identify with the reservations expressed by the party leadership; we have manpower, we have serious personalities but they don’t come close to the party, there is no way we can build a party when all our big guys are not coming together,’ he said.

Eze, who represented Enugu North Senatorial Zone in the Senate, maintained that he remains strongly a member of the party and would work for its growth.

‘We need strong people to win elections; we need to go and canvas for membership; I don’t deter, I am very strongly in APC and I am going to work for APC to see us achieve results. If you see us doing anything, we are trying to build bridges and trying to reach across because it is not a job that one person can do.’

‘I have consistently been fighting for the party, even when we didn’t win the election, I was here to thank you that we did our best.’

‘There has been a lot of challenges, a lot of struggles but between the chairman, Ben Nwoye, Emma Eneukwu and a few others, we have been able to weather the storm.’

‘This is a party to watch but we are not handling it as a party to watch; even the other political parties, they look on us with a lot of respect; but I don’t think that we look at ourselves with that amount of respect, we are fighting ourselves; we are calling parallel meetings, let us resolve in this new year to all pull in one direction.’

‘We need to be hungry for power and let that hunger drive us into being one another’s keeper. If we unite behind our chairman and the executive there is nothing we put our mind that we cannot achieve.’

‘I came this new year to thank you for the services you are rendering to the party, it is a thankless job and it is worse in APC than in other parties. This is a mother that abandons its children; people who get rewarded in the party are not people who work; so they leave members and reward people from nowhere. That is why I commend the acting national chairman, because he said he wants to change the reward system of the party.’

Senator Eze added that the Nigeria President of Igbo extraction was possible with the commitment of members from this geo-political zone.

I’gbo presidency, we need to work for it, it will not just drop from the roof; we have to work for it and it means building alliances, building friends, because it is not something that we here can do alone. So, let us not try to be cagy and shut our doors. I believe that if we work conscientiously, there is something that I see in the horizon coming for this party, but the key is unity,’ he stated.