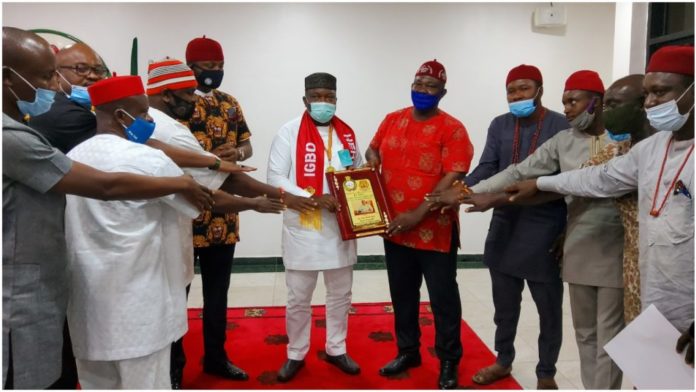 The youth wing of the Ohanaeze Ndigbo (worldwide) has honoured Governor Ifeanyi Ugwuanyi of Enugu State, as the best and the most peaceful governor, not only in the Southeast geo-political zone but also in the entire Igbo land.

Speaking when executives of the youth wing of the Igbo apex socio-cultural organization (worldwide) conferred the honour on Gov. Ugwuanyi, at the Government House, Enugu, the Youth Leader, Comrade (Amb.) Arthur Uchenna Obiora, disclosed that the decision was based on their objective assessment of governance in states of the South East and Igbo land.

Comrade Obiora said that the body devoted time and embarked on assessment tour of the South East zone; saw the performance in various states, such as infrastructure, security, peace and good governance, among others, and ‘we searched very well and found out that His Excellency, Governor Ifeanyi Ugwuanyi of Enugu State is the best, the most peaceful governor.’

The Ohanaeze Youth Leader pointed out that the governor did not lobby for the honour, stressing that ‘it was on merit’.

Comrade Obiora maintained that Gov. Ugwuanyi has remained focused, calm and steadfast in discharge of his responsibilities to the people of Enugu State in spite of the nation’s various challenges.

‘Today, we came together, both South East, Rivers, Delta and Anioma and said that he (Ugwuanyi) is the best, the most peaceful governor in South East and Igbo land’, he added.

The Ohanaeze Youth Leader further disclosed that Gov. Ugwuanyi was ‘the only governor in Nigeria’ that supported the youth group with palliatives during the COVID-19 pandemic lockdown.

Describing Ugwuanyi as a youth-friendly governor, Comrade Obiora commended him for providing leadership in the zone ‘without making noise’ revealing that they came to appreciate his good works, uncommon governance style as well as encourage him to do more.

The Heroes Award of the Ohanaeze Ndigbo Youth Wing (Worldwide) was also presented to Gov. Ugwuanyi in recognition of his commitment to the progress of entire Igbo land.

Also present at the event were the member representing Ezeagu Constituency, Rt. Hon. Chima Obieze, the National President of National Association of Nigerian Students, Comrade Chidi Ilogede, the State Youth Leaders, among others.

Governor of Rivers State, Nyesom Wike, has distanced himself from the presidential campaign posters pasted across the federal capital territory (FCT) and other parts...
Read more
Politics

Austin Chilakpu, Who is the Chairman of the Imo State Council of the Nigeria Labour Congress (NLC), has accused the Imo State Government of...
Read more
Politics

Reports say there is tension in Sapele, Delta State after unknown gunmen stormed a security checkpoint, and killed a military personnel and a police...
Read more
- Advertisment -