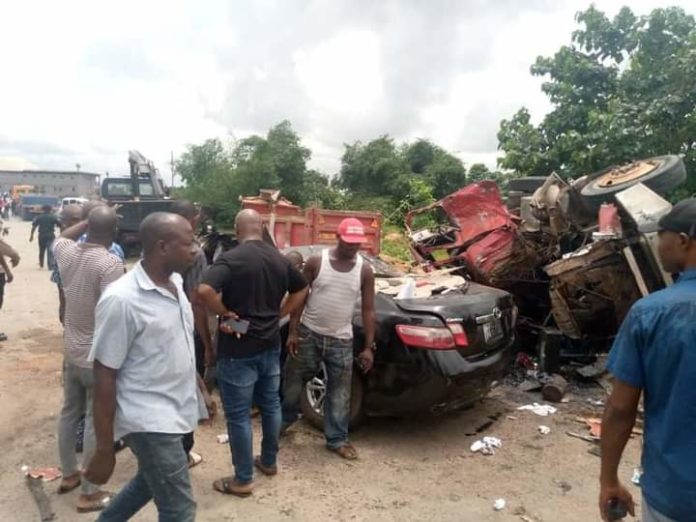 Several shops were on Wednesday night razed in a fire explosion involving a diesel laden tanker in Agulu, Anaocha Local Government Area of Anambra state.
The tanker reportedly crashed when the driver suddenly lost control while descending a slope towards Nise/Amawbia Road of the area.

An eyewitness said the spillage from the truck spread to a transformer and nearby shops which went up in flames.
Similarly, 13 persons sustained varying degrees of injury in another road accident at Okija, in the Ihiala LGA of the state on Wednesday.
The accident which occurred on the  Ihiala- Onitsha Road involved a white Toyota Hiace and a Toyota Sienna.
The  State Sector Commander, Federal Road Safety Corps, Andrew Kumapayi, confirmed the two crashes.
He said no life was lost in both accidents, adding that victims of the accidents were rushed to the hospital for medical attention.
He said, ‘At about 17.20pm on Wednesday night, a diesel laden tanker without a registration number crashed at Agulu town close to Owo filling station while descending towards Nise/Amawbia road.’
‘Combined team of the FRSC and NPF who were on the ground barricaded the crash scene to divert traffic while the men of the State Fire Service extinguished the inferno.’
On 25th November 2020, 13 people got injured in a serious crash involving a white Toyota Hiace bus with registration number SSM 880 ZJ and a Toyota sienna Space bus with registration number GEA 29 AW  which occurred at Okija, along Ihiala-Onitsha road.
‘They were rushed to Our Lady of Lourdes Hospital, Ihiala by the FRSC rescue team from Ihiala Unit Command. Road obstruction was cleared by the combined team of the FRSC and NPF.’
THE EASTERN UPDATES
Facebook
Twitter
WhatsApp
Email
Telegram
Previous articleEnugu Student Who Passed WASSCE With 7As Dies Of Cancer
Next articleEnd SARS: Peter Obi Dismisses Petition Against Him