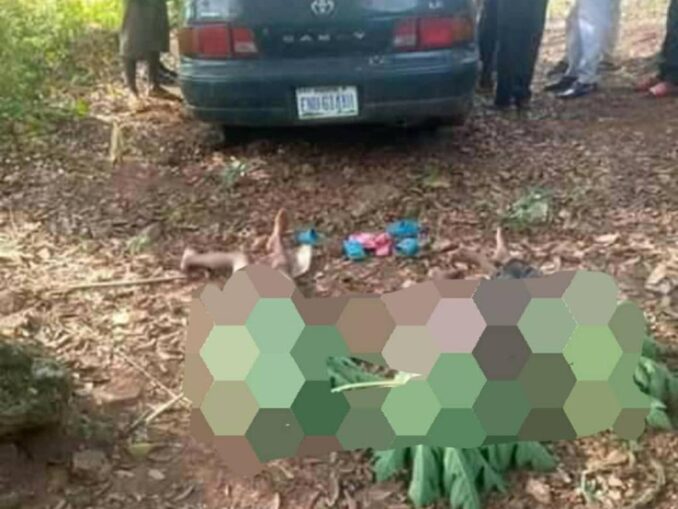 Tragedy struck at Ugwu Ogede in Itchi, Igbo-Eze South Local Government Area of Enugu State on Monday when the bodies of three lifeless children were discovered in a car at a retired police officer’s home.

The victims whose names were given as Chibugo Eze, Chinenye Eze, and Ebuka Ene, had gone to fetch water at a commercial borehole owned and located at the home of a former police officer, but did not return home alive.

Also, two children, Kingsley Eze, and Mmasichukwu were equally rescued from the same car and rushed to the hospital where they were resuscitated.

The parents of the children had raised an alarm when their children who had gone to the aforementioned borehole at about 8 am on Sunday to fetch water did not return home as usual.

Amidst confusion and panicking, the parents of the five children raised search parties who ransacked every corner of the community but could not find the missing children.

The traditional ruler of the community, HRH, Igwe Ike Oke, who confirmed the development to Vanguard described the news as mysterious.

The monarch who is also the chairman of Igbo-Eze South Traditional Rulers Council said that he also mobilised personnel of vigilante and Forest Guard groups who joined in the search of the missing children.

He also said, ‘We were almost frustrated in our search when a community member who went to fetch water heard the voice of a little child calling her name. She traced the voice to a car that had been parked for over six months in the compound where she discovered the children and raised the alarm.’

‘We found three of the children already dead by the time we opened the car. I think they suffocated to death because the car doors were stiffed when we tried to open it at first but we engaged an artisan who forced it open.’

‘One of the two children rescued said they went to fetch water but didn’t meet anyone at the borehole because the owner and the entire members of the family had gone to church service.’

‘He informed us that they were about going home when three hooded men came from a hill beside the scene of the incident and abducted them into the car and left. He said they were all dressed in red cloths. He also said that the hoodlums returned at the middle of the night to take them away but they couldn’t open the car doors because they were stiffed.’

‘We are still investigating the incident and the dead victims have been deposited in the mortuary. The owner of the house has been arrested by police,’ he explained.

The youth leader of Nkalegu Obukpa community where two of the victims hailed from, Ifeanyi Eze, while speaking to Vanguard about the incident described the news as shocking.

The youth leader also said the stakeholders in the community are working assiduously to unravel the circumstances which led to the mysterious death of the children.