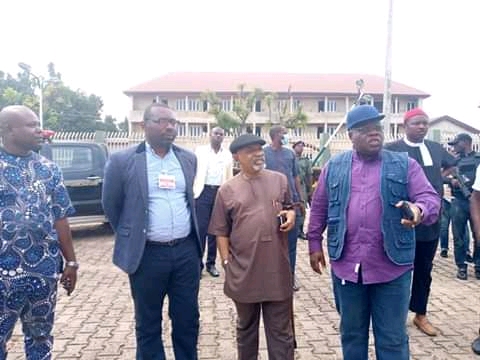 Nigeria’s Minister of Labour and Employment, Senator Chris Ngige has said that the Federal Government will support Anambra State in rebuilding facilities destroyed by hoodlums in the fallout of the #EndSARS protests that recently rocked the country.

Senator Ngige stated this when he made an on-the-spot assessment of the damage done to facilities in different parts of Anambra State.

Recall Governor Willie Obiano had visited the facilities days ago, where he promised that immediate re-construction would soon commence.

The #EndSARS protests had begun peacefully in Anambra State as with other states in the federation, with Governor Obiano once addressing the protesters, making crucial promises to ensure those police officers who perpetrated crimes in the state are expeditely brought to book.

However, at the end of the social agitation, hoodlums capitalized on the volatility of the period and the conspicuous absence of security officials to unleash crimes including torching government property and looting anything their hands could reach.