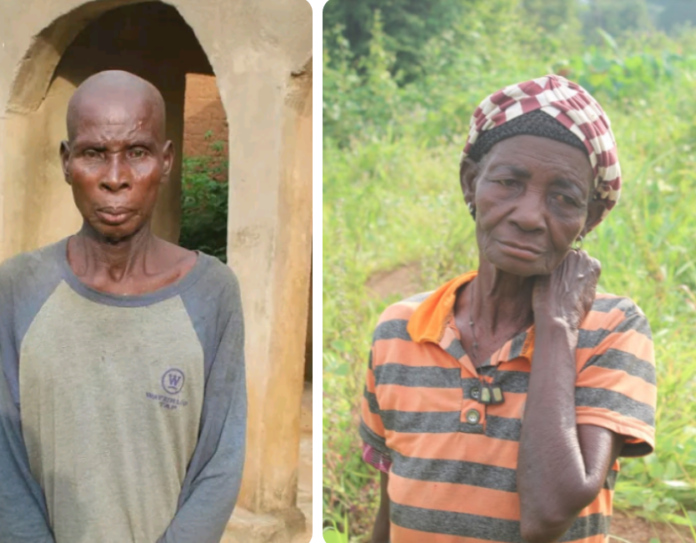 Nwugo Nwankwo never knew that a day would come when she would be hungry and homeless at Onuachi Umuezeoka village in Ezza north local government area of Ebonyi state where she got married. Nwankwo is one of the people displaced as a result of the demolition of houses and farmlands for the construction of an international airport by the government. In September last year, the federal government approved the state government’s request to construct an airport.

The government decided to use the lands belonging to the Umuezeoka, Umuoghara, and Oriuzo and Okaleru communities in Ezza north for the construction of the airport. Without providing an alternative means of shelter, residents were asked to vacate the area.

In February, bulldozers and excavators were sent to the communities, destroying hundreds of buildings and farmlands.

With a hoe in her right hand, Nwankwo dug the farm in search of food on a very sunny day. But after realising that her efforts were fruitless, she opened up: “I am hungry… I am in a big mess. The devastating part of it is that I do not have any other place to sleep except under the tree. To sleep under the tree where rain falls on me and mosquitoes bite me is painful. Some of my children have traveled, leaving me here.

“My children struggled to put up that structure for me and my husband, and now the government has demolished the house.”

Nwankwo now joins over 2.5 million persons displaced in Nigeria, according to the data released by the Internal Displaced Monitoring Centre. The Ebonyi State Emergency Management Agency (SEMA) said there over 15,000 internally displaced persons in the state

Majority of the people in the community are smallholder farmers who engage in the business to sustain their families. But now, those displaced have lost their means of livelihood and can’t contribute to the provision of foods in the country.

IS THE AIRPORT PROJECR A THREAT TO FOOD SECURITY?

According to the United Nations Food and Agricultural Organization (FAO), the world population will reach 9.1 billion by 2050, and to feed that number of people, global food production will need to grow by 70%. For Africa, which is projected to be home to about 2 billion people by then, farm productivity must accelerate at a faster rate than the global average to avoid continued mass hunger.

Nigeria’s population of over 200 million is rising and there is more in food demand. Smallholders farmers have always contributed to food insecurity as the UN’s FAO predicted that the agricultural market in Sub-Saharan Africa will grow from $200 billion in 2015 to $1 trillion by 2030 but the destruction of farmlands has left the people of Ezza north hopeless.

Since his house was demolished, 60-year-old Nwankwo Alo, said he has been in a state of depression.

“I have not been myself. I have lost so much weight and hunger is the most important part of it coupled with the houselessness,” he said.

“See how tattered I look. I have not washed this clothes for days. There is no money to buy soap to wash. I am not eating enough. Why should I even wash my clothes?”.

It was Alo’s first child who built the one-year-old demolished structure for him.

John Onyemaechi was shocked when the excavator pointed towards his newly built bungalow. He is one of the vocal people calling on the state government to compensate the people and provide a temporary place of abode for the displaced persons.

“Our people are suffering. Those of them that are above the poverty level have taken their children out of the state. Some have taken their people to Benue, Cross River, Lagos, among other states. The people who are here are people that are stranded and do not know where to go,” he said.

Onyemaechi, who spent over 10 million to complete his building said when he heard the amount of money the government was giving for compensation, he refused to accept it.

“I cannot accept such. The process of compensation is so rigorous that at the end only N15,000 will remain. To buy a plot of land within the area is more than N1 million.”

“The money was exhausted in the course of trying to collect it from the government at the state capital in Abakaliki. I used the money to transport myself and the processes of getting the documents exhausted the whole money,” he lamented, corroborating what Onyemaechi said.

The demolition of Ngozi Alo’s house was a devastating experience. She gave birth on the night of January 31, 2020, and on February 6, the government sent excavators and bulldozers to pull down her house. She was forced to leave the house with her one-week-old baby.

“I cried because I did not have where to sleep. Rain has been falling on my baby and I,” she said.

“During the rainy season, I passed through a lot. I know I do not have the power to fight the government but I am appealing to them or any authority that can come to my aid. I need a comfortable place sleeping with my baby. I don’t have anything else to do. Both my residential house and farmlands have been collected and destroyed by the government.”

The government gave her N70,000 for the demolition of her house but she lamented the money was not enough for getting another accommodation.

When the reporter spoke with Mathew Nwokporo, the village head of Onuachi Umuezeoka, one of the affected communities affected, he sounded helpless.

“But they did not pay me compensation. They came to demolish our place like that without any compensation,” he said.

“We do not know what to do. He [Dave Umahi] is a governor and he is powerful. Now, I am hopeless. If I want to travel to the village, there is nowhere to sleep. Some of them collected money but is that compensation? It is not even enough. We want the federal government to help us.”

Sam Nweke, chairman of the Human Rights Defenders (HURIDE), described the demolition of the houses in the communities without providing an alternative place for the people to live is a violation of human rights.

“Some of the victims of the incident are now roaming the streets without homes. We are not actually against the airport construction. Our interest is the governor to do the right thing by compensating the people in the villages well,” he said.

When he was contacted, Joseph Nwobashi, special adviser to the governor on the airport project, said the people affected have been compensated.

Asked why the government was compensating those affected with less than N100,000, Nwobashi said the compensation depended on the structure of the affected building.

He also added that the state government had mapped out lands for the people to move to.

“Some of them that have a hut, they should not expect to be paid a million naira,” he said.

“The state government has mobilized builders into the site and it has been cleared. The ministry for lands and survey is now on the land making sure they are divided plot by plot and whoever wants to start to build his or her own can start. They only need to meet the committee in charge.”

Some of the people affected want the government to not just provide lands but to construct housing units for them as the money they got is not enough to clear the land or even build a foundation.

But Nwobashi said the government does not pay for lands and that anything it will do for the communities is in form of assistance.

“If they judiciously use the compensation they gave to them, they can use it to raise another structure,” he said.

He said the government is also making provision for those who do not have where to sleep.

But Nweke refuted Nwobashi’s claim, saying till now, not even a hut has been provided.

“I see the provision of the land to deceive the people. No work is going on at the site. You destroyed their means of livelihood, they are supposed to give them markets and lands to farm in compensation,” he said.

On her part Nwankwo is afraid to die of hunger and cold as a result of the demolition of houses and farmlands.

“The government should provide a house and food for me and my aged husband because the children do not have money to buy land to build a house now for us.”