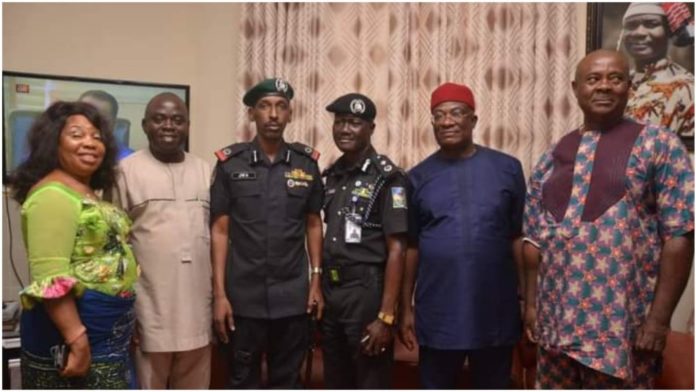 A delegation of the Nigeria Police-led by Deputy Inspector General in charge of ICT Police Headquarters, Abuja, and Supervising DIG for Southeast zone, Mr. Celestine Okoye, have arrived in Umuahia, for an on-the-spot assessment of the level of destruction in the State following the End SARS protest.

Nigerian youths across the country had embarked on protest, demanding an end to the brutalities of the disbanded Federal Special Anti-Robbery Squad, F-SARS which resulted in the wanton destruction of lives and properties.

Speaking during a courtesy visit to Governor Okezie Ikpeazu at Government House, Umuahia, DIG Okoye, appealed to Abia youths to stop the destruction of properties they hitherto toiled hard to build, but rather guard their homes, investment and properties from destruction by outsiders as the future belongs to them.

He charged all aggrieved parties to embrace dialogue instead of resorting to destruction as violence does no one any good.

The Police boss called on parents and guardians to talk to their children and wards to always exercise restraint as the country’s leadership was ready to dialogue with them on the way forward.

Okoye stated that the disbanded SARS will not be recycled, while a new set of officers are currently being trained by professionals to handle criminal cases like armed robbery, kidnapping among others in line with international best practice.

He commended the Abia State Government and the State Commissioner of Police, Janet Agbede, for its mature handling of the situation.

Receiving the Police delegation, Governor Okezie Ikpeazu, represented by his Deputy, Rt. Hon. Ude Oko Chukwu noted that the destruction of monuments and edifices of historic significance as well as government and private properties by some protesters in the State was a self-inflicted injury that will take government time and resources to repair and restore.

The Governor lamented that the seemingly peaceful End SARS protest took a violent dimension when mayhem was unleashed in the State, listing some of the properties destroyed to include the Aba Town Hall, Aba South LGA headquarters, Revenue Offices, TIMASS Office, financial institutions, onion market, Courthouses, private and public establishments that offer employment to thousands of Abia citizens.

He pointed out that apart from addressing the demands of the protesting youths, the government also convened a Town Hall Meeting with relevant stakeholders and appealed to them to sensitize the environment.

Ikpeazu assured that the State Government has already commenced meeting with some of the demands of the End SARS protesters urged the DlG to carry out an objective assessment of what happened in the State as well as look into areas where the police can assist the State to ensure adequate security for all without the grey areas tabled by Abia youths.

He appreciated the cordial relationship existing between the State and security outfits which have led to the State being adjudged as one of the safest in the country.

Governor Ikpeazu called on parents, guardians and relevant stakeholders in the State and nation to appeal to rampaging youths and protesters to stop further destruction of lives and properties, saying that the End SARS protest even though has achieved its aims, has been hijacked by hoodlums.

DAILY POST reports that the Secretary to State Government, Barr Chris Ezem, members of the State Executive Council and the Commissioner of Police, among other stakeholders in the security sector, were present during the visit.