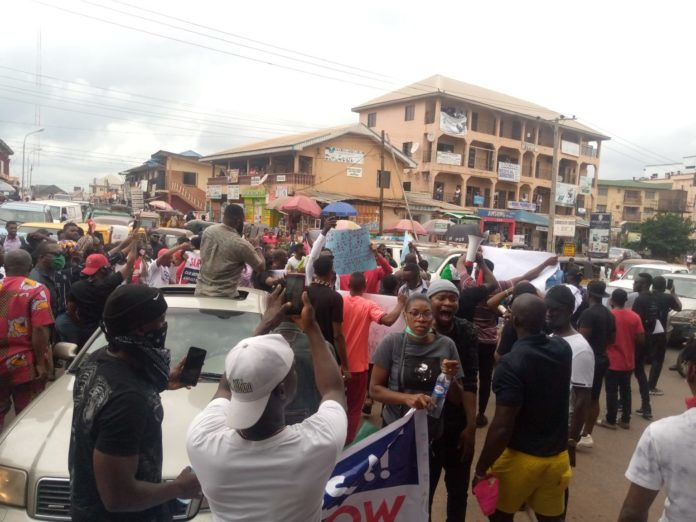 No fewer than 800 youths on Tuesday blocked the entrance to the Imo State Government House for over two hours in the ongoing nationwide protest against police violation of human rights.

The protesters, who wanted Governor Hope Uzodinma of Imo to address them, however waited endlessly, but the governor did not.

They demanded among other things that the government should ensure the immediate release of all the youths unlawfully arrested and detained in the course of the protest.

The protesters also demanded for the immediate construction of all the bad roads in the state, payment of salaries and pensions, as well as total overhaul of security architecture in the country.

Speaking to newsmen, Mr Achiever Onyelike, Chairman, Imo State Youths Forum, said the protest was the consequence of failed political leadership, decay in governance and the high unemployment rate in the country.

He insisted that no amount of pressure or efforts from the government could stop the protest until their demands were met.

‘The protest has gone beyond the demand for end of SARS, because there are many things bothering the youths.’

‘For instance, we are also protesting against the rate of unemployment in the country; if the youths are employed, they will not come out here to protest,’ he said.

Reacting to hoodlums hijacking the protest, another protester, who identified himself simply as Mr Pee, said, ‘Majority of the protesters here have genuine interests and are committed to having good governance.’