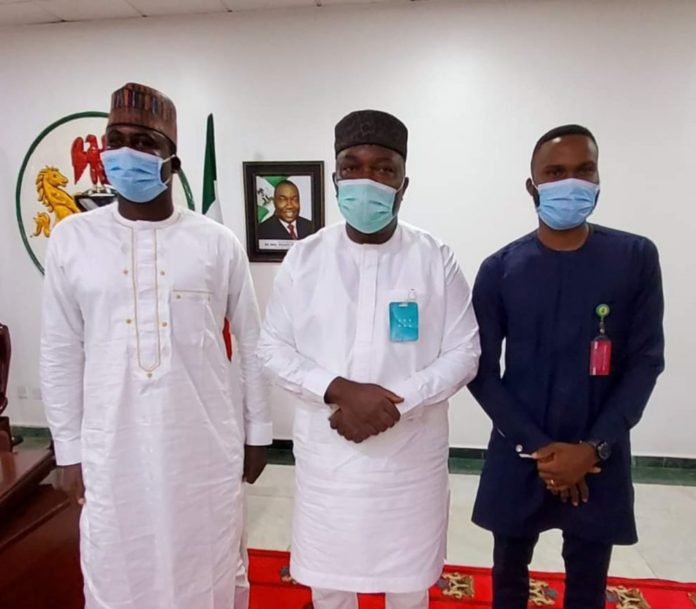 Nigerian students from the 36 states of the federation have described Governor Ifeanyi Ugwuanyi of Enugu State as the most youth-friendly governor in Nigeria, stressing that ‘there is no governor that is as student-friendly as your esteemed person.’

The students spoke when the leadership of the National Association of Nigerian Students (NANS) paid Gov. Ugwuanyi a courtesy visit at the Government House, Enugu, to formally present to him their new National President, Comrade Chidi Ilogebe. Comrade Ilogebe is the first indigene of Enugu State to occupy the exalted office of the students’ leadership in the country.

NANS Senate President told Gov. Ugwuanyi that ‘while virtually all the states of the federation are battling with one security challenge or the other, Enugu State is not only in the hands of God, but I want to authoritatively state that the kind of leadership you have provided for Enugu State has made it a very peaceful state.’

Comrade Mohammed added that ‘Nigerian students are very proud that you have not only created a platform for youths to learn leadership but you have operated an open door policy that is second to none in the history of Nigeria politics.’

Also speaking at the event, NANS Director General, Public Communications, Comrade Salahudeen A. Lukman of ABU, Zaria, Kaduna State, noted with great delight that ‘wonderful things have been happening in Enugu State since your (Ugwuanyi) emergence that have not been happening in any part of this country.’

‘We are very optimistic that with you it will continue to happen because you are a good man’, he said.

Comrade Lukman applauded Governor Ugwuanyi for actively involving the youth in the governance of the state, disclosing that ‘it is established that it is only in Enugu State that most of the local governments are in the hands of the young people.’

Commending the governor for being among the first to pay the new minimum wage in spite of the nation’s economic, security and public health challenges, NANS Public Communications DG pointed out to the governor that “another wonderful thing that you have done that is not yet established everywhere, even in my own state, is the payment of the new minimum wage to the workers of Enugu State”.

According to him, ‘We are dumbfounded that many states are still struggling to ensure that the new minimum wage is implemented while you have started paying this money. This shows your magnanimity and dedication to service.’

The students also commended Gov. Ugwuanyi for his comportment and commitment to the nationwide #EndSARS protest as well as the demands made by the protesting youth, stating that while many states are still looking for how to address the issues surrounding the protest, ‘we are also pleased to note that you have constituted the independent panel of inquiry and visited the defunct SARS office in your state to confirm its closure as directed by the Federal Government and demanded by the Nigerian youth.’

They therefore expressed optimism that the governor will accord their new National President all the needed support and cooperation to excel in his highly demanding responsibilities.