#ENDSARS: Group Debunks Allegations Of Threat To Life By Flavour 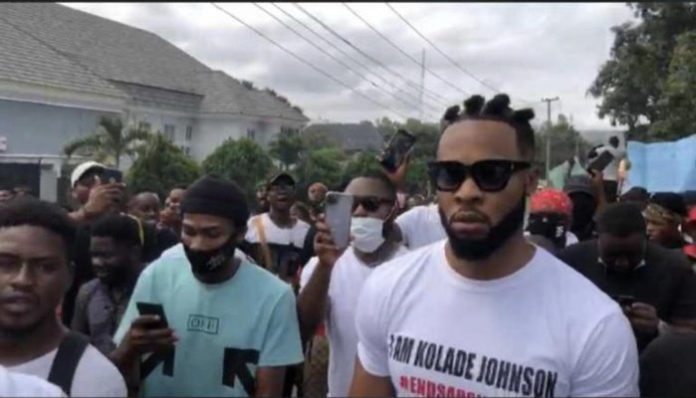 A non-governmental group in Enugu state, Wawa Awareness, yesterday, described as ‘unwarranted and mischievous’ a report credited to famous musician, Flavour alleging threat to his life by Enugu state government. The group said it was calculated to paint the state in bad light.

Leader of the group, Dr. Ikenna Anyanwu told Newsmen that there was no element of truth in the report stating that the Governor of the state came out and addressed the protesting youth and made promises on how to ensure that the issues raised were addressed.  “He also announced the setting up of a judicial panel of Inquiry to investigate complaints of police brutality or related extra judicial killings, as demanded by the protesters.

‘He addressed the protesters amid cheers and reiterated his government’s position on the demand made by the protesting youths disclosing that the panel will be chaired by a High court judge with two representatives of the Civil Society Groups and one retired police officer of high repute as members. The Governor further applauded the protesters led by Flavour and Phyno for the peaceful nature of the protest and expressed the solidarity of the government and people of the state to their cause.’

Dr. Anyanwu, therefore, said that it was the greatest act of wickedness and mischief for anybody to turn around and raise unnecessary alarm over the protest and attributed it to machinations of political interest groups out to paint the amiable governor with tar. “Unfortunately for them, they have woefully failed because even a blind man in Nigeria today is aware of the amiable and fatherly disposition of Governor Ugwuanyi  to issues and they can attest to his many glaring achievements so far in Enugu state.

It follows therefore, that anybody that masterminded the fake news or instigated Flavour to make such a mendacious statement failed and will never succeeded in destroying the enigma that is Governor Ifeanyi Ugwuany because Enugu state has never had it so good.”

In a similar development, the Vice-Chairman of Nsukka Local government Area and former SSA to the governor, Bar. Walter Ozioko stated also that the allegation is untrue and baseless and should be disregarded by all and sundry.  According to him, Enugu state is one of the most peaceful states in Nigeria in view of the fact that the government is unfamiliar with the use of force, a legacy made possible by the Executive Governor of the state who is reputed fro kindness and good governance.

‘In the circumstance, therefore, I implore the hirers of the false accusers to devise a better strategy of playing their dirty politics in view of the fact that this one is dead on arrival.’