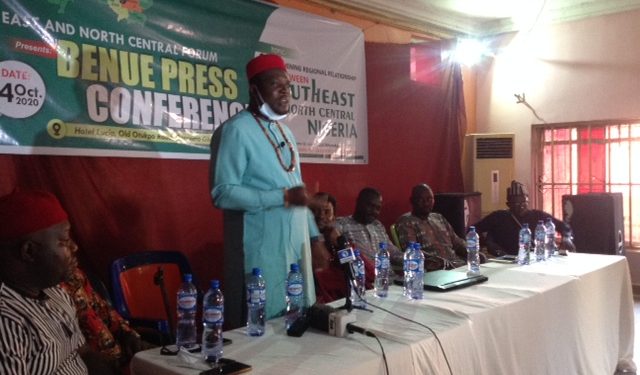 The southeast have opened dialogue with the people of the North Central in respect to its agitation to produce the next president of Nigeria come 2023.

This came to the fore during a press conference organized by the South East and North Central Forum in Makurdi, the Benue State capital on Wednesday.

Chairman of the Forum, Hon. Afam Ezenwafor who is also chairman, Conference of South East APC House of Assembly candidates, said they have come to seek the support of the north central because the south east has realized that it cannot successfully prosecute the 2023 project without the support of other regions.

While noting that the Igbo people see Nigeria as their business, Ezenwafor assured that the southeast will not bring a bad product to the people in 2023 but will put forward its best and sellable hands.

“Igbo people see Nigeria as their business and since they don’t ever want their business to crash, Nigeria will not crash in the hand of the Igbo. We are also aware that there’s need for us to bring a sound candidate and that we can assure you we will do because the destiny of this country lies in our hands.

We are here to assure our brothers that we believe in the Nigerian project and to let them know the need for them to support us produce the president of this country come 2023.

While decrying the incessant herdsmen attacks on farmers of the northcentral zone of the country, Ezenwafor insisted that what the northcentral needs mostly now is security assuring that a southeastern president will provide that security.

“We need strong alliance from the northcentral with other regions to help the southeast actualize this dream. This alliance will also address the issue of insecurity occasioned by the farmer herdsmen conflict. The new relationship is for unity, he said.

On his part, the convener of the Forum, George Ugwuja explained that the forum was put together by the conference of 2019 South East APC House of Assembly Candidates made up of all the candidates that ran for 2019 state assembly elections across all the south eastern states.

He said part of its major agenda in recent times has been to demand for a Nigerian president of south eastern extraction adding that the forum is counting on the support of the northcentral by improving on the economic and political collaboration between south east and north central states to form synergy towards delivering that expectation.

Ugwuja said some of the resolutions reached at the forum include, “That north central Nigeria will support south east Nigeria to achieve their quest for 2023 presidency, and “that the north central and south east are collaborating in a new political formation to confront all perceived political marginalization across the two zones,” among others.

He said the forum, while commending President Muhammadu Buhari for implementing major projects in the south east and north central including the second Niger bridge, stressed the need to continue to pressure the government to maintain all federal roads connecting south east to north central including the otukpa to obollo afor road to improve economic activities most especially transportation of farm produce to larger markets.

Also speaking, the host, Engr. Benjamin Iordye advocated that since Nigeria is adopting and adapting the federal republic system of government, ethnic minorities must be given a shot at the presidency through constituent and balanced rotation of power in the spirit of FairPlay, Justice, equity and equality.

Other speakers at the event, including, Dr. Sam (Benue), Dr. Abada Aseya (Taraba), Hon. Ihenko Daberechukwu and Hon. Chiwunba Ngwu (Enugu) separately gave their backing to the south east presidential agitation and assured of their unalloyed support towards ensuring the realization of the lofty dream.

“The agitation for anybody from the southeast to ask for the presidency is a welcome development. The south easterners have not been getting it because they have been asking alone. That is why we have seen it as a good development for them to carry the minority along to win the war/race.”