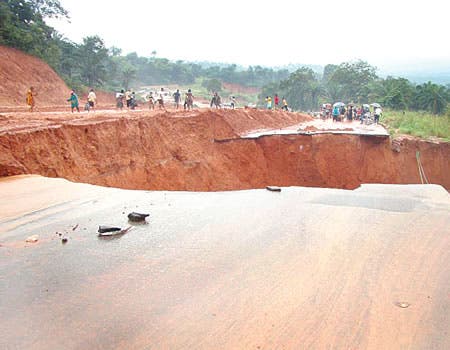 As the rains begin to shower regularly, residents of Imo state, especially those in the state capital, Owerri may not survive the season.

Reason is that, they are at the verge of suffering natural disaster occasioned by heavy down pour. Worst hit are residents of Trinity Christian Church road Akwakuma in Owerri North as they have raised alarm over the vicious erosion menace in the area, following incessant rainfall over the weekend.

The area which has become a serious death trap has forced residents inside their homes as both vehicular and human movement has been halted due to the damage caused by the erosion.

When Trumpeta arrived the scene, the extent of damage was better witnessed than told. Two storey buildings were outrightly cut off, with no escape route for those living inside. Not only were they cut off from their opposite neighbors, there is culpable fear that the buildings might cave in if the erosion is not controlled following more rainfall, judging from the extent of damage.

Speaking with a resident Mr Ezenwa Nwadike, he informed that the erosion became worst this year despite efforts made by landlords of the two buildings and the neighborhood association.

Nwadike stated that, even after sinking over 1.5M and mounting pillars to control and combat the menace, all proved abortive as the pillars and ongoing construction work got washed out by the menacing flood.

He appealed to the government of Imo state and other relevant agencies to expedite action and ameliorate the sufferings of people living around the area, even as palliatives done to reduce the damage has proven abortive.

Speaking also, a care taker of a hotel, High Tower, in area, Mr Boniface Anyaogu who said the erosion has been giving people living in the area restless concern, informed that, despite a schedule visit of the commissioner for Environment few months ago, nothing has been done on the said site.

He expressed fear that if nothing is done as fast as possible, residents risk loss of lives and properties.
“The erosion is so vicious that it is trying to eject people from their homes and might destroy lives and properties”.
“People cannot come out again, they either go through the backyard or bushes, some of them have vehicles but they cannot drive in and out.