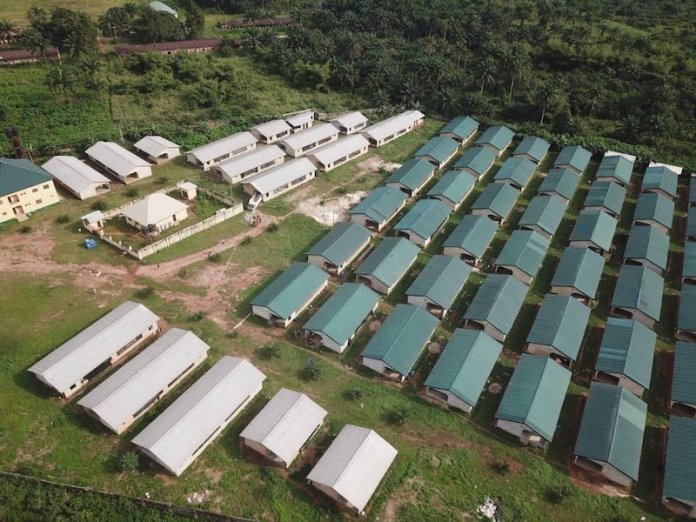 When the government of Abia State commenced the implementation of the Accelerated Agricultural Development Scheme (AADS) in November last year it was received with the scepticism that usually attended government programmes. It was intended as an empowerment tool for youths to make a living from poultry farming.

But even the target beneficiaries were unsure it would be a success. “To be sincere, when the project started, we thought it was the usual government thing, said Ifeanyi Ukpai, a youth from Ohafia. “But to my greatest surprise, we were empowered with about 300 birds for the first cycle and along the line after about six to eight weeks, the birds were off taken and we received what was due to us”.

Like so many other beneficiaries of the AADS, Ukpai is now singing a song of success and is now fully convinced that the programme is for real. The young man is now running the second cycle of the programme and the birds would be off taken any moment from now and more money would flow into his bank account. “It a great empowerment and job creation project for Abia youths,” he enthused.

Ms Mercy Robert from Bende Local Government has similar experience. She considers herself as a privileged beneficiary of the AADS programme.

Recounting her journey into poultry business, Ms Robert said that she was practically jobless until she was introduced into the project by the desk officer, Mr. Johnson Udensi.

The aspect of the programme that specially thrilled her was that “after the training, funds will be given to us to start on our own”. Her enthusiasm was so infectious that immediately she told her people about the venture they quickly made a pen available and eagerly awaited her to start her poultry business. “Since I came here I have nothing to regret,” she said.

These success stories of Abia youths newly engaged in poultry business was made possible following the decision of the state governor, Dr Okezie Ikpeazu to offload as many Abia youths as possible from the unemployment market through the agricultural sector.

He had recognised the enormous employment opportunities inherent in the agricultural sector hence when the Central Bank of Nigeria (CBN) came up with the AADS he was the first governor to key into it and promptly commenced its implementation in his state. Without any delay Ikpeazu built an ultra modern poultry cluster at Umuosu Nsulu in Isiala Ngwa North Local Government to serve as training ground for the would be poultry farmers drawn from the youth population. The idea was that before venturing into the business of poultry farming they must be made to understand its rudiments in order to make huge success of it.

During the inauguration of the poultry cluster in November 2019, Ikpeazu disclosed that the 55, 500 capacity poultry cluster sitting on 3.5 hectare of land has a modern administrative building with offices, classrooms and living quarters for the trainees. He mandated the AADS implementation team to train 1,000 Abia youths drawn from across the 17 local governments of the state to become poultry farmers.

The plan was that at least 50 young poultry farmers would emerge from each of the 17 local governments. The Abia chief executive noted that the cluster has virtually everything needed by poultry farmer to excel in the business – training, poultry production, feed production and provision of market for the farmers to sell their products. He had stated that the feeds would be subsidised at N2,000 per bag to further drive down the cost of production to the poultry farmers thereby enhancing their profit margins.

The governor therefore made a clarion call for youths to embrace the AADS as a good means of livelihood. To make it more attractive and ensure seamless take-off for the new poultry farmers, the governor directed local government chairmen to provide pens for the poultry farmers from their respective domains.

According to the consultant to the project, Igwe Nonso Ogbunamiri, over 500 Abia youths have so far been trained and empowered to engage in poultry farming since the programme commenced at the tail end of 2019. He assured that the AADS was on course to achieve the mandate of training 1,000 youths by April next year as government “has done so well in supporting us” adding that there is no interference whatsoever even from the ministry of agriculture, the supervising ministry.

The poultry expert explained that the job creation opportunities in the AADS comprised both the poultry farmers and the employees of the poultry cluster. He said: “There are two sides to this; the first is the ones we are training on how to rear their own birds and also empower them to set up their pens. The other one are the ones we have given job opportunities and paying their salaries, so these are the two sets we have here and that was the directive from the state government and CBN. We’re doing it perfectly well here”.

The first set of trainees, according to the consultant, comprised 225 youths and the cluster is taking in more youth in batches for the training programme. He pointed out that though the main training services are provided at the government-owned poultry cluster at Umuosu Nsulu, some privately owned farms have been selected as training centres.

For instance the UPS Farm at Mbawsi is also serving as training ground while another farm has been acquired to serve the same purpose. The UPS Farm, which employs 65 workers, including administrative staff, is highly rated in the business of poultry farming.

And in consonance with the promise made by Governor Ikpeazu to establish poultry clusters in all the three senatorial zones of the state, Ogbunamiri disclosed that government has already released funds for the building of a poultry cluster at Obingwa local government in Abia South Zone. It’s expected that the third cluster would be sited at Abia North Zone to complete the circle.

With the pace the training programme has been going, the consultant who is also the chief executive officer of UPS Farms, expressed strong optimism that Governor Ikpeazu’s intention to train and equip 1,000 young poultry farmers in Abia would be fulfilled within the set period.

“I can authoritatively tell you that within two weeks we should be talking about 500 youths that this programme has taken care of presently,” he said. And having achieved 50 per cent of the target set by the governor, “I’m sure that very soon we’ll get there” and Abia would be sufficiently engaged in churning out poultry products from so many bird farms at various locations across the state.

Ogbunamiri said that he was aware of negative comments concerning the AADS programme posted on some social media platforms. He fended off such misconceptions, saying that the nay Sayers only need to come to Nsulu and see things for themselves instead of holding on to the ill-conceived belief that every programme of government was bound to fail in the course of implementation.

The consultant noted that the AADS project has become a huge success in Abia, adding that credit should go to Governor Ikpeazu for his efforts in agricultural development. Ogbunamiri explained that the success of the programme stemmed from the fact that both Governor Ikpeazu and the CBN partners have been strictly committed to giving support for the smooth implementation of the programme without interfering in any form.

“The Government of Abia State has done so well in support and we’re so proud that we have not had any interference even from the Ministry of Agriculture, but he (Governor Ikpeazu) gives us a listening ear at any point in time we call on him. We have been getting so much support from him at any point in time I run to him,” he said.

The consultant and other members of the implementation team of the AADS project have been kept on their toes by the state governor who has never taken his eyes off the project. Ogbunamiri further disclosed that any time he went to present progress report the governor always insisted that the youths must not only be trained in poultry farming but must also be provided with the wherewithal to stand firm and make huge success of the venture. The beneficiaries of the AADS programme have already started testifying to the positive effect it has made in their lives.

After receiving the first payments of the profits made from the sales of their birds many of the AADS beneficiaries went to social media platforms to celebrate their “financial breakthroughs”. They jubilated and profusely thanked Governor Ikpeazu for creating the opportunity for them to be gainfully employed in the agricultural sector instead of milling around in search of the elusive white collar jobs.

The consultant said that Governor Ikpeazu was very much impressed by the enthusiasm displayed by the beneficiaries and the manner they went online to celebrate their first earnings from poultry business. This show of gratitude was said to have impressed the governor so much that he gave the consultant further directive to ensure that the young poultry farmers were assisted to stand very firm on their feet. He urged the upcoming youths to take the programme very seriously so as to enjoy the benefits therein.

All the beneficiaries that spoke with our correspondent testified to the ample benefits of the AADS programme. Among them were Mr. Paul Owunna, Ejike Ejike and Glory Okiyi all from Ikwuano as well as Patrick Ikemba and Great Ifeanyi Ukpai from Obingwa and Ohafia LGs, respectively, were all in agreement that the AADS programme represents a great empowerment and job creation project for Abia youths, for the state governor has offered them a lifetime job opportunity which each of them has grabbed with both hands and would eternally remain grateful to him for coming up with such youth-friendly project of such magnitude.