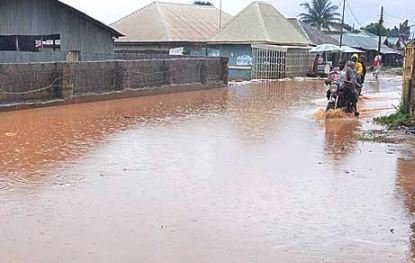 The National Emergency Management Agency (NEMA) has warned that some communities in Abia State may be flooded before the end of the year.

The agency’s team leader for Imo and Abia states, Mr. Umar Abdulaziz, stated this on Monday  in Umuahia, the Abia State capital.

Abdulaziz, who expressed worries over the impending flood in the state, advised the government to take drastic measures to avert a disaster.

The NEMA team leader, who spoke with Governor Okezie Ikpeazu during an advocacy visit, urged the governor to put machineries in place to mitigate the effects of flooding in the state.

He said: “We are here on a specific mission to deliver the early warning message, as directed by the NEMA Director General, AVM Muhammad Muhammad, for your government to take swift action against impending flooding.”

Ikpeazu told the NEMA delegation that his administration was committed to protecting the lives of the residents.

The governor, who was represented by the Secretary to the State Government (SSG), Mr. Chris Ezem, said some communities in Abia had been vulnerable to flood.

The governor assured the Federal Government agency that his administration would brace up to the challenge.

“As a government, we will continue to do our best for our citizens, but the situation here calls for external assistance. So, we call on you to always come to our aid whenever you are needed,” he said.