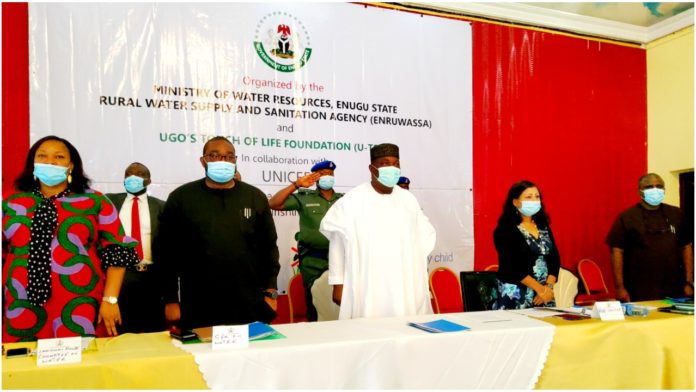 Governor Ifeanyi Ugwuanyi of Enugu State, on Tuesday, declared open a workshop for the development of the state’s roadmap for the attainment of the ‘Open Defecation Free (ODF)’ goal by 2025.

At the event, Ugwuanyi reiterated the State government’s resolve to end open defecation by 2025.

The two-day event, which is being organized by the Enugu State Government and Ugo’s Touch of Life Foundation (U-TOLF) in collaboration with UNICEF, is expected to set the agenda for actualisation of improved sanitation and hygienic status for the state as well as behavioural change amongst communities, etc, for healthy living.

Declaring open the workshop, Gov. Ugwuanyi disclosed that available statistics indicate that about 46 million Nigerians practice open defecation, stressing that such an awkward act impacts negatively on the health, educational outcomes and socio-economic life of the people.

The governor who further disclosed that “the Federal Government of Nigeria has committed to end open defecation in Nigeria by 2025, in line with revised global targets set by United Nations”, added that his administration is determined to domesticate this vision and align its actions to national goals.

Consequently, he pointed out that his administration has declared emergency on Water Supply, Sanitation and Hygiene (WASH) sector in the state with the target of making the state open defecation free by 2025, and also inaugurated the inter-ministerial steering Committee for revitalizing the WASH sector to lead coordinated actions in the state.

Gov. Ugwuanyi also pointed out that the state government signed up to the national Partnership for Expanded Water Supply, Sanitation and Hygiene (PEWASH) strategy – a national collaboration for a multi-sector partnership designed to provide opportunity for the water and sanitation sector to leverage expertise, technology and financial resources from all levels of government, development partners, private sector, civil society and community, to improve the sector.

He added that the state government will also lead in strengthening systems at local levels including planning, human and financial resourcing, implementation, private sector mainstreaming as well as monitoring of results, expressing optimism that “this two-day inception workshop is expected to set these agenda”.

While thanking UNICEF and U-TOLF for their invaluable support for the workshop, Gov. Ugwuanyi urged other private sector organizations including Rotary Club and religious organizations to help drive the behavioural change needed for attainment of these goals.

Speaking on behalf of UNICEF, the organization’s WASH Manager in Enugu, Ms. Mamita Bora Thakkar, thanked Gov. Ugwuanyi’s administration for its commitment to the attainment of the national goal of open defecation-free status by 2025, stressing that the governor’s presence, support and inspiration were exceptional and commendable.

She added that UNICEF remains committed to providing technical support to the federal and state governments for the actualization of the set goals of the ODF Roadmap.

In his opening remarks, the Special Adviser to the Governor on Water Resources, Mr. Anthony Dubem Onyia, stated that the Ugwuanyi administration has undertaken concrete steps towards the fulfillment of its obligation to participate in the PEWASH process and tap into the Federal Government’s National Wash Action Plan.