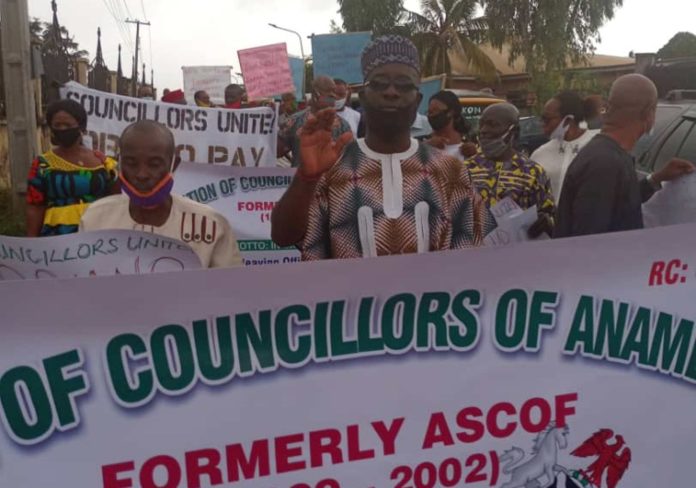 Former elected councilors in the 326 political wards in Anambra State who served between June 1999 and May 2002 have taken to the streets to drive home their demand for unpaid allowances running into millions of naira, 18 years after they left office.

The former councillors, who claimed that no fewer than 50 of their members had died due to hardship occasioned by nonpayment of the allowances, caused traffic gridlock in Awka as they marched to the headquarters of Awka South local government, the state House of Assembly and the state secretariat.

Operating under the aegis of Association of Councilors of Anambra State, the ex-councillors recalled that the Revenue Mobilization, Allocation and Fiscal Commission approved new salary structure for all the elected officers of the Federal Republic of Nigeria, adding that the then Principal Secretary to the governor, Mr Hez Ndukwe issued a circular mandating the various local government chairmen at that time to implement the new package.

Chairman of the association, Mr Godson Nnubia and secretary, Mr Ifeanyi Obi, in a statement in Awka, said the Anambra State House of Assembly also passed the said recommendation into law, regretting that the state government had refused to implement it.

The statement read: ‘We resorted to peaceful means of pursuing our statutory benefits, which our counterparts in other parts of the federation had received.’

‘We had appealed to the relevant authorities in the state, like the traditional and religious leaders, members of the State House of Assembly and the national assembly to intervene on our behalf in this case of man’s inhumanity to man, but without achieving the desired result.’

‘Successive governments in the state only liquidated arrears of salary shortfalls and we expected that the government should, out of human touch, clear the outstanding allowances as there was enough money in the state/local government joint account to offset the debts.’

‘We have already lost about fifty of our members to untimely deaths resulting from frustration, hunger and stress-related diseases. Most of us are equally withdrawing our children from schools and universities due to man-made poverty.’

‘For more than two and half years of our tenure; each councillor in Anambra State received as his full monthly salary package between ₦10,000 and ₦27,725.00 as against the recommended take-home package of about ₦158,000.00 recommended by the Revenue Mobilization Allocation and Fiscal Commission and approved by Anambra State House of Assembly.’

‘The ‘most pathetic aspect of these denials was that the severance gratuity that was designed to be paid en-bloc to every elected person in Nigeria that served out his tenure in order to help cushion the effect of redundancy/hardship after leaving office, has not been paid 18 years after leaving office.’

‘We would have graciously moved to the various local government councils we served to collect these allowances, but the state government has refused to conduct local government election, thereby keeping all the resources of the local governments, including their allocations from the Federation Account.’

The ex-councillors said they would no more keep quiet and be dyeing silently and vowed to consistently bring the matter into the public domain until the right thing was done.