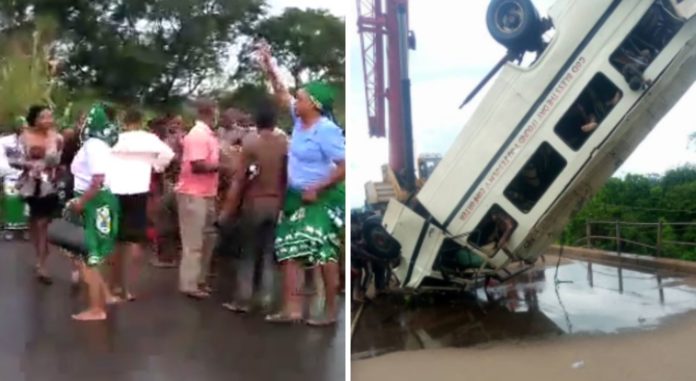 No fewer than 8 more dead bodies have been recovered from the Akaezeulwu River in Ivo Local Government Area of Ebonyi State, the location where over 36 persons lost their lives when their bus plunged into the River.

The incident occurred last Friday night when the mourners were returning from a burial ceremony in Afikpo North Local Government Area of the State. Last weekend, when Governor David Umahi of Ebonyi State visited the scene of the accident, only 14 dead bodies were recovered from the deadly River.

An eye witness who spoke with Vanguard revealed that the Divers brought from neighboring states to assist with the rescue were seen in the River without any safety mask, oxygen, boots among other gadgets needed while in the river.

Narrating his ordeal, Mr. Nnemeka Nwobodo from Enugu State whose elder sister died on the bus stated that: “We have been here since Saturday. After they brought out the bus, there has not been government presence anymore. Although they have three divers from Port Harcourt. From all through Sunday 20th September 2020, no government presence. On Saturday, they were able to bring out the bus and that was all they did.

“Then today, they have been able to recover another 4 decomposing bodies, 3 women and 1 man whom have already lost his hand to fish or the accident. The divers are entering the water but they are entering the water without any of their gadgets. Usually, they will need to go in with oxygen and oxygen mask but now they can’t do that, they are just swimming like the other local divers trying to see the much they can recover.

“We have gone to the other village because the bodies of some of them have left the scene of the accident because of the flowing nature of the river that has moved the bodies away to the next village called Mgbede and after the Mgbede village river, it enters another village river. So all the effort today is for us to get across to the villagers for help.

“Yesterday we were able to send a text to Governor Umahi who referred us to local government chairman of Ivo local government area and we were able to get across to him. After a series of calls when we told him we have spoken to the Governor that was when he picked our call claiming that they have 3 boats and have been here. Although there are no boats in the river. The Chairman said he will send some people to attend to us but nobody is here to assist.

“We have recovered 8 bodies after Saturday when Governor Umahi left. But what the Pastor is saying is that the bus is 38 Seater bus with some attachments which make it about 40 or more persons in the bus. The funniest thing now is that a National Television reporter is here now and they are taking him with the divers to go and pose with oxygen and other things to pretend that everything is alright but there is nothing like that.

“The only government presence here is the Federal Road Safety Corps. The former Local Government Chairman has been coming around and going. There is no official boat but we only have local boats and the divers are not agreeing to go in.”

Several calls were made to the line of the Ivo LGA Chairman, Kings O. Ogbadu so as to answer to the allegation of the absence of government’s presence at the scene of the accident but he didn’t pick his calls. He only responded with a text message: “I am in a meeting. I’ll get back to you ASAP.”

The eye witness who described the action of the divers as unhealthy stressed that if nothing was done urgently, the remaining corpses will be washed into another flowing River and the corpses will be lost completely.

NAN gathered that some of the victims were members of Christ Peculiar Church of Nigeria in Enugu State as the driver of the ill-fated bus, Mr. Nwonu Chinedu from Ikwo LGA of the State.