HomeFeaturesMan, 91 Leads Protest To Obiano Over Trouble In Community
Features

Man, 91 Leads Protest To Obiano Over Trouble In Community 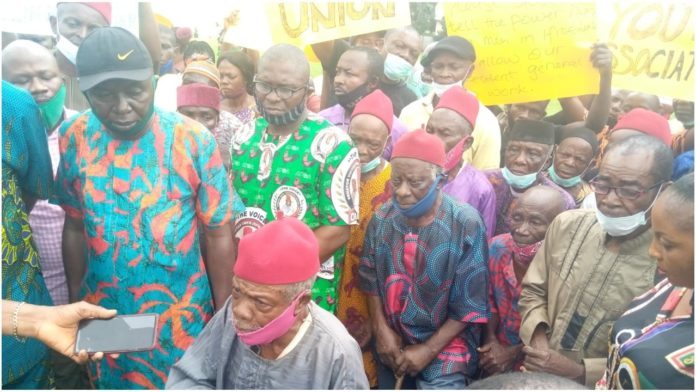 A 91 years old man, Elder Obiorah Ekegha has led a protest of over 500 persons, consisting of youths and women from Ifitedunu community in Dunukofia Local Government Area of Anambra State to the government house in Awka.

Ekegha who is the chairman of Ojiana, a powerful group that prides itself as the custodian of the culture and tradition of the people of the community said he was inspired to lead the protest because some individuals in the community want to cause division.

Addressing the Secretary to the State Government (SSG), Prof Solo Chukwulobelu during the protest at the government house at the weekend, Ekegha said there have been trouble in the community since after its town union election in December.

‘Uche Nwoye who is now the President-General of the community won the election which was held on 28th and 30th December 2019, alongside his executives.’

‘The SSG, Prof Chukwulobelu while addressing the protesters admitted that there was a letter of complaint from some members of the community to government, but assured that government, through the Commissioner for Local Government and Chieftaincy Matters would look into the letter and also that of the protesters and ensure that peace exists in the community.’

‘I thank you all for the peaceful disposition you took, and of course you know that the Governor is a man of peace. He will ensure that peace continues to exist in your community,’ he said.