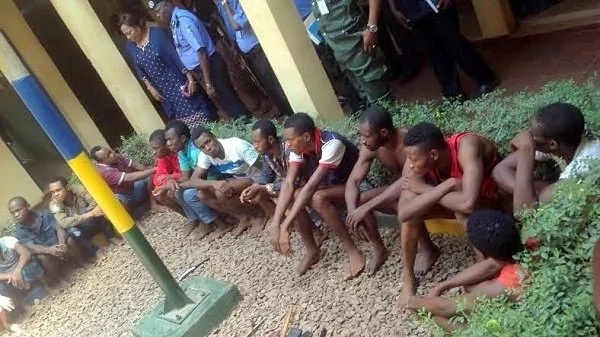 The Abia State Police Command has rounded up 45 suspected armed robbers, kidnappers and cultists, recovering arms and ammunition from hideouts. Commissioner of Police, Mrs Janet Agbede, said the command, was in a war against criminals.

‘We were able to flush out the hoodlum who are terrorising residents and recovered arms and ammunition when we had encounters with them. They abandoned their arms and escaped from the scene of crime after sustaining serious injuries.’

‘The operatives also arrested four suspected armed robbers, intercepted a tricycle parked along Ngwa Road by the Mosque and the occupants were trying to kidnap one Chikwa. Two suspects, Mark and Emmanuel, were arrested for armed robbery.’

‘Hired killers sent by one Uche to assassinate one Okorie of Umungere Amahia Amaogudu Ahaba Imenyi Isiukwuato Local Government in military uniform were arrested when they attacked him in his house and robbed him of his Samsung Galaxy S9 plus phone valued at ₦48,500, cash sum of ₦357,000. The victim was forced to transfer ₦100,000 with his mobile phone to an account number provided by one of the armed robbers.’

‘SARS operatives arrested two suspects, Azuka and Onyenso. They dressed in army uniform and kidnapped Chisom. They took him in a bus to an unknown place. He was forced at gunpoint to transfer ₦650,000 with his cell phone to an account number, 0108053525; account name, Azuka Ojiegbe of Access Bank.’

‘SARS operatives also arrested two suspects, Ebere and Okezie, for armed robbery and kidnapping. While the SARS operatives were on intensive patrol at Ogbor Hill, Aba, they intercepted a tricycle when a victim raised the alarm. The suspects collected her ATM card and forced her to give them her ATM pin which they used to withdraw ₦268,000.00 from her bank account.’

‘One Chibuike of Osusu by Seven-Up Bible College, Aba, was arrested. He robbed one Nzubechi along Okpuloumubo Road of her Tecno phone valued at ₦26,000,00 at gun point. We recovered one locally made pistol gun from him.’

‘Also, operatives arrested Chidozie with a bag of poka Indian hemp, one locally made single barrel pistol at Ohanze village in Obingwa Local Government.” Agbede warned criminals relocate from the state. He said all the suspects would soon be charged to court.’