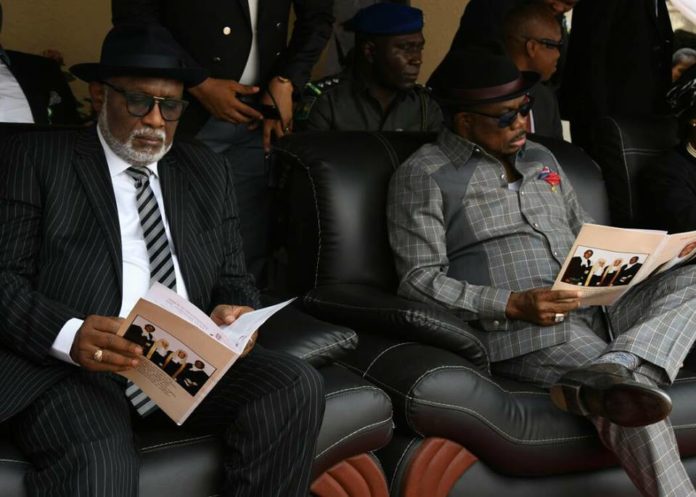 Willie Obiano, Rotimi Akeredolu, Chris Ngige and Arthur Eze have one thing in common: they are either pursuing something or something is pursuing them. Whichever way, their major goal is to exert dominion over people and politics in their states.

Governor Obiano’s own is quite understandable. No leader likes being slighted. But some 12 Anambra traditional rulers did just that to him. They went with Anambra billionaire business mogul, Prince Arthur Eze, to Abuja to see President Muhammadu Buhari without informing their governor. They said it was to thank the President for all the wonderful things he had done for the people of the South-East. Another version has it that they went to submit a petition against Obiano to Buhari over alleged mismanagement of local council funds. Some other forces stalled their plan to see the President. The monarchs later came back to collect one-year suspension letters.

Last week, one of the monarchs, the Igwe of Mkpunando Aguleri, in Anambra East Local Government Area, Alex Edozieuno, was dethroned by his community and replaced by Johnson Onyeka-Mbanefo. Edozieuno was accused of offending the gods of Mkpunando.

In all this, Ngige, who is the Minister of Labour and Employment, supported Obiano, who is of the All Progressives Grand Alliance (APGA). Though he is a chieftain of the All Progressives Congress (APC), Ngige led a protest march against the traditional ruler of his town, Alor, in strange solidarity with Obiano. He even called on the governor to banish the renegade monarchs and punish Arthur Eze, a fellow APC chieftain, for sabotage. The fact that these two APC stalwarts are not on the same page signposts a looming battle for the soul of the party as the state prepares for the 2021 governorship election.

It is imperative to note that Anambra is never short of moneybags who interfere in the running of the state. Sir Emeka Offor reigned supreme during Chinwoke Mbadinuju’s era as governor. Chief Chris Uba tormented Ngige in his own time as the governor of the state. At a point, Ngige was kidnapped even as a sitting governor. It was Peter Obi that came and systematically ended this reign of godfathers and moneybags.

Nevertheless, Eze appears to be aiming to continue in this godfather syndrome. He is loaded with cash, which goes on errand for him sometimes. To spite Obiano, he reportedly gave the suspended monarchs some cash gifts and Lexus S470 sports utility vehicles. He boasted that Obiano was a small fry as he had installed three Presidents in Africa and assisted in enthroning many governors in Nigeria.

This must have apparently riled Obiano the more. The governor assembled the traditional rulers who shunned the Abuja trip at Ekwueme Square Awka and gave them 151 brand new Innoson Ikenga model SUVs. Royal splendour, you might say.

Frankly, I have no problem with the gifts, if the economy were buoyant and if it was not tainted by a political bullfight. I should even be happy that the vehicles were purchased from Innoson Motors, an indigenous motor manufacturer. However, the timing and motive for the action make it a Greek gift.

Anambra, like many other states of the federation, are going through harrowing COVID-19 experiences. There is downturn in the economy of Nigeria. The recent increase in fuel price and electricity tariff by the Federal Government is still causing ripples across the country. Unemployment and inflation rates are soaring. The state of most of our public infrastructure is horrible. The debt profile of the state as at September 2019 was over N34 billion. Amid these scenarios, it is wrong to embark on an ego trip with Arthur Eze. Or, if one may ask, of what economic value are the gift items to the state?

Perhaps, the state’s economy has picked up. Chairman of the Anambra State Internal Revenue Service (AIRS), Dr. David Nzekwu, said recently that there had been a significant rise in the state’s internally generated revenue. According to him, it rose from N8.7bn at the end of 2013 to N26bn as at close of business on December 31, 2019. The AIRS is targeting N30bn in 2020. Currently, the revenue projection of the state from the registration of businesses is N15bn annually.

This is good. But, if one may ask, have we cleared our debts? One hundred and fifty-one SUVs must have cost a fortune. That money could have been utilised in repairing some of the various roads that are in a state of disrepair in the state. It could have been used to provide some hospital equipment in the state’s general hospitals. It could have gone a long way in giving some facelift to some schools in the state. Even the state’s international airport still under construction could have benefitted immensely from this money. Spending billions of naira on SUVs at this critical time, to say the least, is very unfortunate.

Also unfortunate is a similar action by the Ondo State governor, Akeredolu. His is even polluted by political pettiness. Or how do you explain that he gave out the 2020 model of Kia Sportage SUVs worth N1.2bn to the state lawmakers who are loyal to him? Seven members of the House who were against the move to remove the deputy governor, Agboola Ajayi, were not given the vehicles. Why this discrimination? The fact that they don’t support him politically is not enough reason to deny them what he gave their colleagues. He can do that with his personal money not with the state’s funds, which belong to all citizens of the state.

The governor even goofed by saying that his administration kept to its promises of providing the cars despite dwindling resources of the state. He claimed it was not for political reasons. So, the priority for the governor when he is faced with poor economy is to buy cars!

As expected, the Speaker of the Ondo State House of Assembly, Bamidele Oloyelogun, thanked the governor for being a faithful servant leader. He said it was the second time Akeredolu would present official vehicles to members of the House in three and a half years. Why won’t he praise the governor when, in spite of dwindling resources, he decided to give them cars? Pathetic!

The major problem with Nigeria is myopic leadership. It manifests at every level of governance. At the local government level, most chairmen only concern themselves with what benefits them and their cronies. At the state and federal levels, it is the same story. Nobody bothers about the general wellbeing of the people. All we care about is how to rig and win elections,0 how to garner as much money as possible and how to undermine the system for our selfish interests. At the end of the day, where are we going with all these acquisitions?