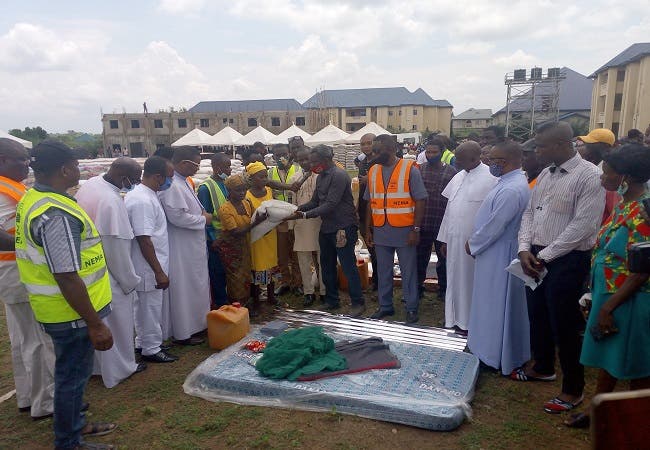 The distribution, which took place at at Amagu community, was supervised by the Director-General (D-G) of the National Emergency Management Agency (NEMA), retired AVM Mohammadu Mohammed.

Mohammed, who was represented by the South-East Zonal Coordinator of the agency, Mr Fred Anoziem, said the items were meant to provide succour to the victims of the intra and inter community disputes in the area.

He said that Ochuenyum, Ofenekpe, Agubia communities and parts of Alike would benefit from the items, which included food and non-food essentials.

He said that the agency was aware of the various communal clashes in the area, arising from boundary disputes, internal political wrangling and chieftaincy title tussles, among others.

He said that the boundary clashes mainly involved communities in Ikwo and those between Ikwo and their neighbours in Cross River.

“Though the relief materials are meant for three communities, we are going to extend them to other victims in Igbudu and Ekpomaka, among others,” the NEMA D-G said.

He said that although disasters could happen, communal conflicts, leading to disasters, “could be prevented or avoided”.

“Conflicts, such as communal ones, did not emanate from nothing. They are usually due to human actions.

“The agency is aware of the border dispute that erupted between Ikwo and Cross River communities in April 2013.

“Also in June 2016 another report of crisis from the area reached us, while the third was reported in January this year.
“Communities involved have been completely displaced and their farmlands declared buffer zones.

“It is therefore sad to lose lives, property and those affected go through the trauma of displacement over crises of great dimension,’’ Mohammed said.

He regretted that present day youths no longer have regard for human lives or respect for tradition and constituted authorities.

“Ebonyi, which was hitherto known for peace, unity and love for community development is gradually turning into a theatre of hostilities.

“The number of crises recorded in Ikwo, and by extension the state, in the past few years is evident that age-long cordial relationships have turned sour, while man-hour, man-power and resources meant for development had been lost,’’ the NEMA boss said.

He therefore called for a rethink, self appraisal and attitudinal reorientation of the people to curtail the spate of communal conflicts in the area.

He said that arrangements were underway to bring assistance to victims of land and border disputes in Izzi LGA.

In a remark, Ogah commended President Muhammadu Buhari for approving the fund for the materials and promised that the items would be equitably distributed to the benefitting communities.

He assured his constituents of effective representation, adding that he would liaise with his colleagues from Cross River to explore ways of ending the protracted inter-state boundary disputes.

Mr Ken Eze, the Executive Secretary, Ebonyi State Emergency Management Agency, who represented Gov. Dave Umahi, commended the lawmaker for his effort to alleviate the plight of his constituents.

Naija247news reports that the relief items included 503 bags of five kilogrammes of parboiled rice, 503 bags of garri, 403 bags of beans, 61 bags of iodised salt, 125 bags of granulated sugar and 147 cartons of seasoning, among others.