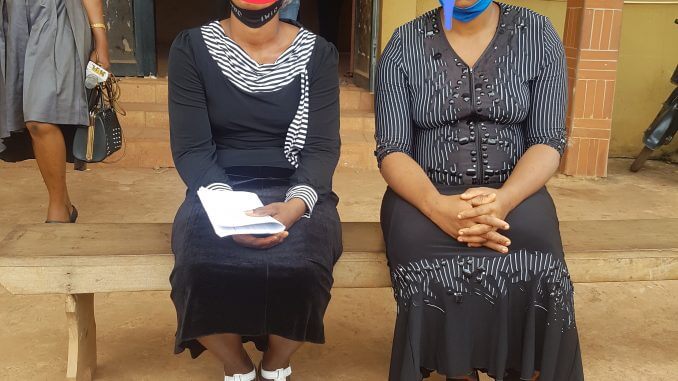 The custody of a four-year-old boy is enshrouded in mystery following the intrigues in the matter as two families are laying claim to the child. AMARACHUKWU EGWUAGHA reports that the foster parents are claiming ₦500 million as compensation before the child can be released.
A former mentally-unstable lady who goes by the name Ifeoma Chukwu is demanding the custody of her four-year-old son who is now being fostered by a family in Abakaliki, Ebonyi state.

Ifeoma a native of Abba community in Njikoka local government area of Anambra state is a graduate but was raped in Bauchi state after her youth service year.
While she got back home in that mental state, the parents noticed she was pregnant after which she ran to Ebonyi state where she gave birth to her baby under Akanu Ibiam flyover on September 23, 2016. She was later taken to a hospital by a good Samaritan were she and the son were attended to. After three months, she left the hospital and went to her home in Anambra but returned later to demand for her child after 18 months.

Blueprint met with the 27-year-old and her sister at the premises of National Human Rights Commission in Abakaliki where they came to lodge a complain after many effort to recover the child from Ebonyi State Ministry of Women Affairs and the foster father, Mr Steve Ali, an ex-aide to the commissioner of the above ministry failed.
They said they have had several meetings with the ministry to recover the baby but the foster parent sued them and the ministry to court. They said despite the judgment in their favour, Ali still refused and renamed the boy as Chukwudi Ali.

Ifeoma narrates her experience. according to Ifeoma, “When I finished my NYSC, I developed mental illness. I used to hear voices telling me to flee from home and I ran away in 2016.  In the process, I was raped by one man like that. I came back home and my people didn’t know I was pregnant. So, my tummy started protruding and my sister told me that I am pregnant.”
“Again, I ran away to Ebonyi state. I was sleeping under the bridge that time and gave birth to a baby boy under the bridge. Some people that saw me took me to a nearby hospital. There in the hospital, they took my baby to a new-born unit to attend to him. They asked me the name I wanted for my baby and I told them Ifeoma Chukwu, after my own name.”

They gave me serious medical attention and I regained my normal senses. When I recovered, I went to them to give me my baby, but they refused may be because I didn’t have anybody around me. I left the hospital and went home. When I came to collect my baby with my people, they now said that they gave my baby to one man for adoption,” she Narrated.

Ifeanyi, sister of Ifeoma said, “My sister is a graduate of the University of Jos. After her graduation and NYSC, we noticed she was mentally ill and we started treating her. One day, she ran out from home, we later got her in Upper Iweka where she was begging for alms. We got her home and noticed she was pregnant.
“She ran away again but we  found her under a bridge where she was begging. When we got her home, we noticed that she was no longer carrying the pregnancy. She told us that she gave birth to a baby boy in Ebonyi state and took us to a federal hospital in Abakiliki. There, the doctors and nurses asked her why she abandoned her baby and ran away. In the hospital, someone told us to get a lawyer who wrote to the chief medical director (CMD).

“The CMD told us that the baby was no longer with them, but has been taken to the Ministry of Women Affairs. He then gave us a letter to present to the ministry.
“We went to the ministry and met a head of the department who asked us to go back and address the letter to the commissioner under whose custody the baby was kept. We did. After about six, seven months, the commissioner wrote to our lawyer and asked us to come to Abakaliki for a meeting. We honoured the meeting, but she was not available.
“Our lawyer wrote to the commissioner again and she fixed a new date. When we arrived for the second meeting, we met the wife of Ali instead of the husband. Curiously, Ali once came to our house and told us that the government of Ebonyi state sent him to come and investigate the matter. We had a fruitful discussion and he told us that he would report to the ministry his findings.

The commissioner invited us for another meeting and I noticed that the same Ali who claimed the state government sent him to us is the one holding our baby. I asked him if he is the one in custody of our baby, but he declined any comment. Thereafter, the wife became wild, saying the child should not be released, boasting that even the biological mother of the child can’t take the child from them.
“I was in the High Court over the matter and the HOD in charge at the ministry asked me to bring the educational qualification of my sister so that the judge can authenticate that the people who trained her in the university can take care of the baby as against Ali’s claim that he has gone to our place and discovered that we are so poor. I gave the HOD all the documents. When I came to the court, I noticed that the procedings were not  open and I asked why. I was told it is a family court that a child’s case is not to be open.

“In the court there, I met someone who helped me to contact a lawyer that took up our matter and wrote to the ministry again to release our child. Because of the delay, our lawyer now wrote to the Deputy Commissioner of Police requesting them to help recover the baby since the women affairs commissioner had written to them for assistance.

“The police invited Ali and told him to release the baby to us, but he refused, for which he was arrested. While in police custody, he called his lawyer who came and bailed him, claiming the ministry should pay them N500 million before the child can be released. Because of this, the matter has lingered.
“Around June this year, our lawyer told us that judgment on the matter has been passed, that the court said we should use any force to collect our baby. The police went to the man’s house for recovery of our baby, but again Ali refused on the ground that he has approached the Appeal Court at Enugu. Our lawyer then directed us to the National Human Rights Commission to report the matter.

“The ministry asked us to come and collect our baby since the court ordered the release of the child, but Ali’s lawyer said no ruling on the matter have been served them, neither have they seen the court judgment.”

Meanwhle, the women affairs commissioner, Mrs Rebecca Ogbuewu affirmed what Ifeoma and the sister said, noting that several efforts have been made to recover the child from Ali but all failed.She expressed shock at Ali’s behaviour, but blamed the police whom the ministry had petitioned to help recover the child after the court ruling.

The state coordinator, National Human Rights Commission, Ebonyi state office, Okorie Christopher Onyekachi, said the case was referred to them from their office in Awka, Anambra state, saying when they went through it and saw the weighty nature, they decided to involve the public through the press.  He said his office was yet to take any decision pending when they hear from the other side, but decided that Ifeoma and the family should tell the story to the press by themselves.

When contacted, the state police spokesperson, DSP Loveth Odah, said police is handicapped since the matter is still in court.
“If it should be an illegal adoption, I think the police should have known from the beginning because such a matter should have been reported to the police in writing.
Yes, she is now well, maybe the parents didn’t know they are supposed to have reported by writing a petition to the Commissioner of Police narrating their story for which the matter would have been investigated but we got to know after the matter was already in court. They took a civil action against the accused person before coming to the police.
“The police is already handicapped because a court of competent jurisdiction was already on the matter. As soon as the magistrate or the judge takes action on the matter and maybe the judgement comes in favour of the complainant, we can go ahead and investigate and receive the baby from the foster parents to the real one.”