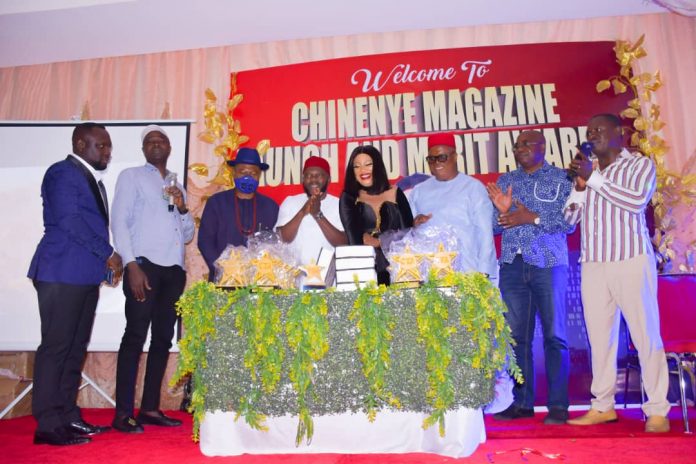 The Premiere Launch and Merit Awards of Chinenye Magazine, one of the premium publications in Anambra state, did recognise and honour the distinguished nominations of several award recipients who were earlier Unveiled few days before the launch award ceremony.

Some notable personalities who were noticed and recognised with reputable awards across diverse award categories include, former President of the Federal Republic of Nigeria, HE, Goodluck Ebele Jonathan, the Executive Governor of Anambra state, HE Gov. Willie Obiano, the Executive Governor of Rivers State, HE Nyesome Wike, Senator Abaribe, Senator Dino Melaye, High Chief Johnbosco Onunkwo, Yul Edochie, Hon. Aniago amongst others.

Speaking to our STATE PRESS, the Convener, Host and Principal Executive of Chinenye Magazine Premiere Launch and Merit Awards, Chinenye Rose Igwah congratulated the Awardees, invited Guests, Representations, Partners and Supporters. She noted that without them, Chinenye Magazine may not have achieved the fruition and media capacity its boasts with today. The event also had side attractions of comedy, cultural troop performance and dinner Reception.

Chinenye Magazine and TV, though recent, is known with quite an influencial network of visibility, especially across Anambra state and the southeastern region of the nation. It had continued to report and break exclusive events, happenings and developments across its online and Social media pages and handles.