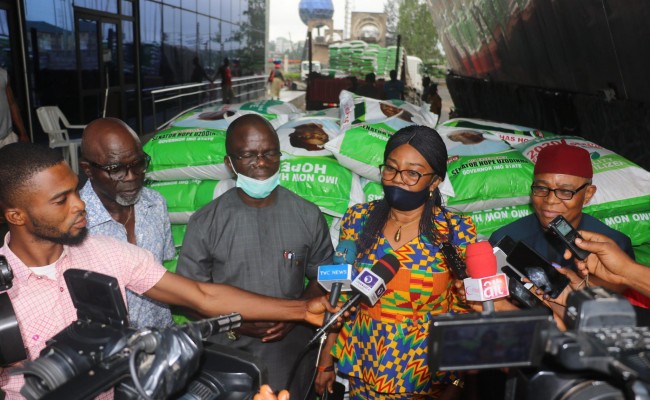 Determined to boost agriculture in Imo State, the administration, led by Governor Hope Uzodimma has flagged-off the distribution of fertilizer to farmers in the 27 Local Government Areas of Imo State.

The idea is to enhance food production, food security and food sufficiency for the people of Imo State.

Performing the ceremony on behalf of the State Government, at the premises of Imo International Conventional Centre (IICC) Owerri, the Special Adviser to the Governor on Bureau for Local Government and Chieftaincy Affairs, Hon. Mrs. Rubby Emelesaid the gesture is a big relief to Imo farmers who desire increased yield from their farm produce.

She expressed gratitude of the entire Local Government to the State Government for encouraging the farmers of Imo State through the prompt and timely delivery of the fertilizer, saying it  will surely enhance 2020 agricultural harvest in the State.

Mrs. Emele informed that the farming season varies, and in different phases; and that certain crops are still being planted as there are late planting season in some areas. She emphasized that the fertilizer is coming at the right time when farmers are in need of it.

Answering questions on the quantity and number of bags to each LGA, as well as   level of government subsidy on each bag, Mrs. Emele said that each Local Government is expected to receive about two trailer loads and that they are  totally free to the farms.

Expressing his delight on behalf of other IMC Chairmen of the 27 Local Government Areas of the Imo State, the ALGON Chairman and the Interim Management Chairman of Oru West Local Government Area, Hon. Willy Okolieogwu thanked the Government of Senator Uzodimma for coming to the aid of Imo farmers, promising that as soon as the fertilizers get to the LGAs they will definitely get to the actual people they are meant for.

He assuaged the fear of politicizing the fertilizer distribution on partisan bases, and assured that they will definitely get to true farmers in the LGAs, as the LGAs have registered the farmers in the different wards.

In an interview, the IMC Chairman of Owerri Municipal Council, Chief Ambrose Nkwodinma eulogized the efforts of the State Government in the Agricultural sector and promised to use his good office to ensure that the fertilizers get to the targeted people that it is meant for.

He recalled that not long the Governor Uzodimma distributed large quantities of palliatives to Local Governments and prayed God to sustain him.